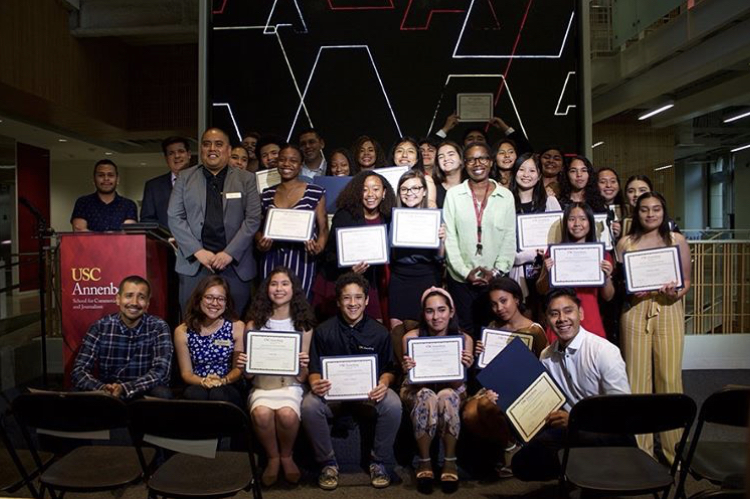 The Annenberg Youth Academy cohort of 2019 gathers for a photo after graduation on July 12.

As I nervously opened my email during spring break earlier this year, I was extremely shocked and excited to find out that I had been accepted into the Annenberg Youth Academy (AYA).

AYA is a summer workshop where 26 Los Angeles high school students are selected to attend a four-week long program at the University of Southern California (USC). This workshop aims to give students a greater understanding of media, journalism and civic engagement through rigorous classes taught by USC professors.

AYA consisted of four different periods each day that allows students to have hands-on training in various areas of media journalism. Using the tools that we were learning daily, each student was also expected to consistently report through articles, social videos and podcasts.

During the program, I wrote a feature story on Associate Dean of Admissions Allyson Hill and a news story on the inequalities between the Women’s and Men’s World Cup. I also wrote a biography on another AYA student, Kamilah Morgan and an opinion story on why recipients of the Deferred Action for Childhood Arrivals should be protected under the law. In a group with four other AYA students, we created a website for our final project about how teenagers use social media for political activism.

Throughout the four weeks, AYA students heard from guest speakers such as Dean of USC Annenberg Willow Bay, Vice president for USC Civic Engagement Earl C. Paysinger and many USC alumni who are currently working in the journalism field.

In addition to these sessions, students also met with a college advisor once a week with the goal of writing and perfecting a University of California personal insight question essay. By the end of the program, every student had a polished essay that was ready to be submitted to a university.

From Olvera Street to Homeboy Industries, we also attended four field trips throughout this program that enriched our curriculum even more. Through access to brilliant journalism professors and equipment, I learned immensely during AYA and made lifelong friends in the process.

A week after AYA ended, I attended GRAMMY Camp, a five-day music industry workshop that introduces high school students around the world to the music business. I was a part of the music journalism track in the program.

I have never been interested in playing music so I was skeptical about attending the program at first but I’m extremely grateful that I did. Through this program, I learned about a field of journalism that I had never explored before.

During GRAMMY Camp, eight other music journalism students and I were able to report on a performance by The Head and the Heart and participate in a press-style interview with pop star Jojo. We also participated in a session run by music journalist Eve Barlow.

Despite my initial nervousness and extreme exhaustion throughout both programs, I had a once-in-a-lifetime experience. Although I walked into AYA and GRAMMY Camp not knowing anyone, I walked out with new friends and close bonds that made those sleepless nights worth it.