This is the 4th time The Pearl Post has been named Best High School Newspaper. 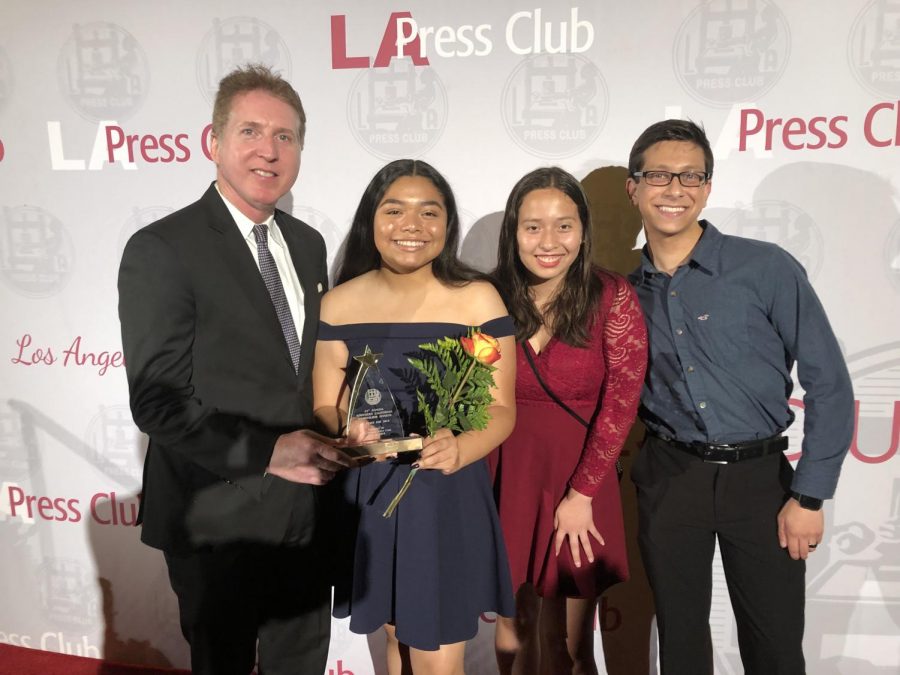 Along with “Best High School Newspaper,” The Pearl Post was also a finalist for “Best Website.” They didn’t win that category. Staff Writers Casey Wanatick and Itzel Luna were also nominated for “Best News Writing” for their article on Birmingham Community Charter High School’s girl’s lacrosse coach facing sexual molestation charges. They did not win their category but received a $1,000 scholarship through a raffle during the awards ceremony.

In the student newspaper category, The Pearl Post was up against The Accolade from Sunny Hills High School and The Matador from San Gabriel High School. The Matador won second place and the Accolade won third place.

The event was held at the Crystal Ballroom in the Millennium Biltmore Hotel in Downtown Los Angeles and started off with a red carpet event. After that, there was a silent auction until the doors to the ballroom opened, signaling the start of the event.

The awards began while dessert was served. Many individual awards were given out, including the President’s Award that was given to the creative team of “Surviving R. Kelly,” a documentary that told the stories of women who were sexually, mentally or physically abused by R&B singer Robert Sylvester Kelly, famously known as R. Kelly.

“We started with three survivors. We ended this documentary with 54 survivors,” Executive Producer Tamra Simmons said. “When they say there is great power in numbers, believe them.”

The ceremony was then followed with a speech given by Dr. Judea Pearl who introduced Nina Elbagir as the winner for the Daniel Pearl Award.

“What is it about journalists that drive them to leave their polished offices for the dusty rooms of the dark side,” Pearl said about Elbagir’s work.

Elbagir is a senior international correspondent for CNN. In 2018, she traveled to Nigeria where she went undercover as a wealthy Nigerian woman trying to flee to Europe to investigate the dark side of migration.

“It’s so much easier to continue to look within and not care about what’s happening outside of your borders but it matters,” Elbagir said. “What we tolerate out there speaks for what we will tolerate at home.”

“Because of him, there are now kids who look like us who can say ‘you know what, I want to be like you one day’ and that’s a role model,” Johnson said while introducing Hill.