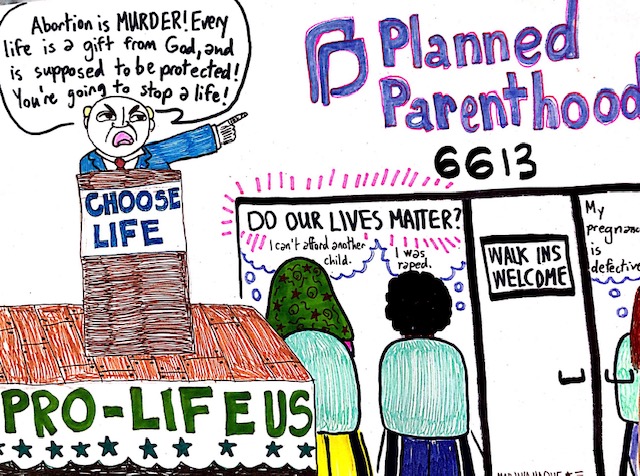 Abortion has been an accessible method of reproductive healthcare since 1973 when the Supreme Court ruled it legal in all 50 states in the case Roe v. Wade. However, recent legislative action in the South has been trying to eradicate and criminalize it and parties involved.

On May 7, Georgia signed HB 481 into law. Going into effect January 1, 2020, the proposed “heartbeat” bill would prevent someone from getting an abortion after six weeks, when a fetal heartbeat usually begins. Georgia is the sixth state to pass a heartbeat bill since January 2019. Alabama has taken a more extreme action recently signing HB 314, the Human Life Protection Act, which if passed, would ban abortion statewide, no exception. It would not only prosecute women, but also abortion providers with up to 99 years in prison.

Alabama’s bill bans abortion in the case of rape and incest as well, which means sexual assault survivors will have to carry and birth the baby of their attacker against their will. That is not only a violation of their bodily autonomy but a deeply traumatizing experience that nobody should have to go through and cannot be authorized by law. These bills are ordained by lawmakers on the basis of their morals, an abstract concept, that are affecting real people’s lives with concrete, dehumanizing consequences.

Legally, none of these bills are constitutional. A fetal heartbeat does not mean the baby has a high chance of living and it cannot be a guaranteed safe pregnancy at six weeks, or even detectable, especially for women with the irregular period flow. This is why heartbeat bills have been repealed by Supreme Court in the past, but with a conservative majority sitting in the court now, heartbeat states hope to reintroduce and reuse it to overturn Roe v. Wade.

If enacted, this law will hit black and brown women and women in poverty the hardest. Women of color are notoriously neglected and disrespected in America’s hospitals and healthcare systems. The CDC (Center for Disease Control and Prevention) reported that black and indigenous women are three times more likely to die from complications during pregnancy than white women.

Women who can afford to will find the means and resources to work around these incoming laws but the vast majority of women cannot. They will suffer on account of it and we will see more pregnancy-related deaths in the face of our government’s disregarding of women’s health.

Our politicians are not our doctors. A woman’s reproductive health is between her and her trusted medical professionals. They are not up for political debate. Abortion is already a laborious procedure both emotionally and physically and to convict women like criminals for exercising their right to an abortion would not prevent them from happening, but only further people’s distrust in authority, and increase our already staggering rates of mass incarceration.

Abortions will always be around, but to have them legally would be to have them safe and supervised. To truly get rid of abortion, pro-lifers could advocate for the distribution of contraception and sex education, as well as organizations that promote it, so that abortions aren’t an immediate solution to unplanned pregnancies.

The heartbeat bills and a statewide ban on abortion in Alabama are irrational and dangerous. If people were pro-life in the entirety of that phrase, they would defend the lives of women, and their reproductive rights. We need to recognize that the women and girls of America’s future are just as worthy of living a safe and healthy life as the unborn embryos the pro-life movement defends.