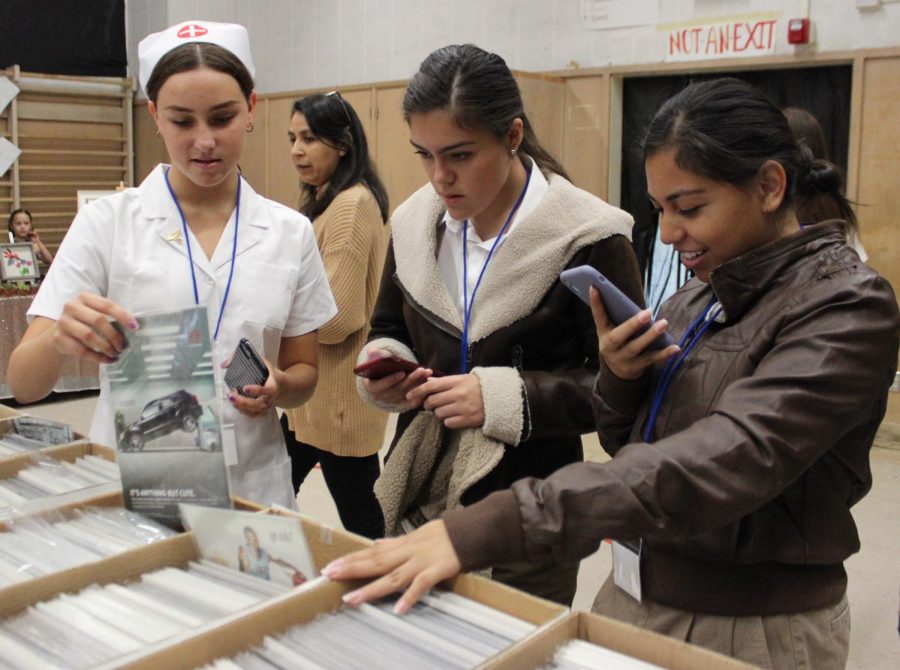 Sophomores Petra Vass, Valery Barrera and Sara Marquez check out the comics sold at a booth in the vendors room during Pearl Con IV on May 11.

Although he is just weeks away from his retirement, science teacher Stephen Schaffter kept up his high school spirit at the fourth annual Pearl Con and already has plans to return and help organize next year’s event.

“We had the World War II museum, funnel cakes, a dance exhibition (and) far more participation by community members this year,” Schaffter said of the event that took place on May 11.

Science teachers Schaffter and James Morrison are the founders of Pearl Con, which drew hundreds to the campus on a cool Saturday to view comic books vendors, check out the car show and listen to a variety of speakers, including actress Aliyah Royale from “The Red Line” on CBS.

Some of the new additions to this year’s event were recruited by Francisco Ortega, the school’s new history teacher. Ortega organized the World War II museum and dressed up as a military officer.

“I took the initiative on that because as soon as I came to this school and realized that it used to be an army hospital, I started doing research and started compiling some artifacts,” Ortega said.

The museum featured artifacts that ranged from currency, to license plates and life jackets. Along with the museum, there was a World War II-themed encampment activity that featured soldiers and nurses that were played by Ortega’s students.

The addition of a car show returned to Pearl Con this year as well. The cars drew the attention of many pedestrians and people driving by. One of the cars that were presented was a 1915 one-of-a-kind fire truck. The show featured classic and more modern luxury cars, many of which are owned by Daniel Pearl Magnet High School cafeteria manager Kathy Mrasz’s family.

Pearl Con is the main fundraising event for the Daniel Pearl Magnet High School PTSA and estimated to earn nearly $5,000. It also doubles as a way for many incoming freshmen to get acquainted with the school. This year, there were around 450 people in attendance including paid attendees, volunteers and participants. Next year’s Pearl Con is scheduled to take place on May 9.

“This year was by far the largest Pearl Con yet,” junior Katharina Hanna said. “It had more attractions and events that people could participate in.”