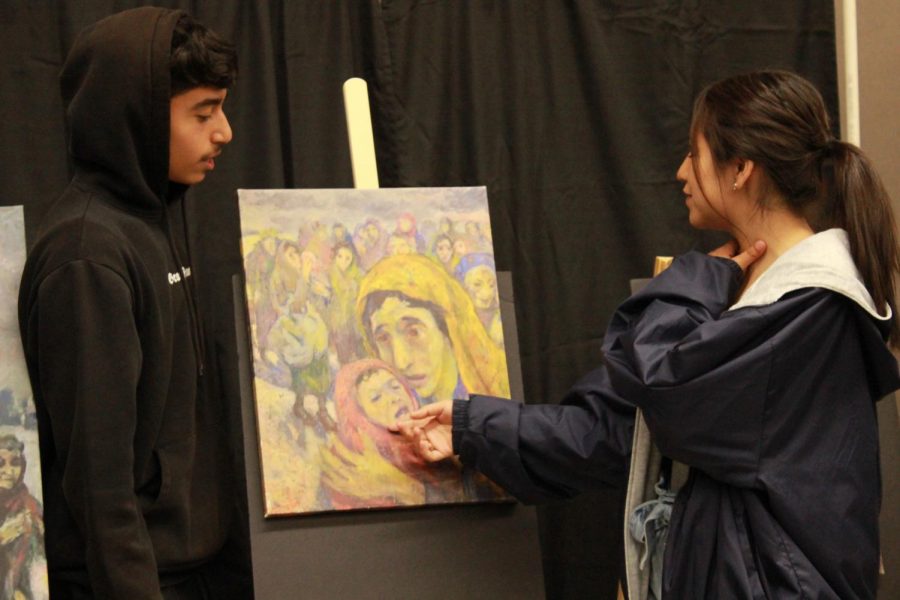 Sophomore Devin Contreras explains this David Labkovski painting to Anie Lopez on May 9.

Life during the Holocaust for a young Jew and her brother was filled by homeschooling from their starving parents, on the top floor of an apartment.

During periods five and six on May 9, sophomores listened to speaker Louise Lawrence-Israels detail her life while in hiding after Nazi Germany invaded her country and occupied Holland in 1939. At first, her Jewish family endured segregations such as wearing yellow stars that isolated them or the taking of valuables and even rights to own businesses, land or influential jobs.

“Jews were not allowed to own businesses,” Lawrence said. “(My father’s) business was taken away and he became a pants-presser. He said he could help his family, everything was taken away from him and (yet) he could still eat and work.”

However, Lawrence’s family moved away after a heavily-religious Jewish family across her street was murdered or sent to death camps, except a sister who stuck with Lawrence’s family and a brother who later escaped.

Cooped up on the top floor of an apartment their father rented out, with fake identification papers, Lawrence and her brother were homeschooled for most of the day. It served as a type of distraction for them. They were still kids and didn’t realize the gravity of their situation or have anything they could remember from the past to compare it to.

“My parents never talked about outside life,” Lawrence said. “(But) May 5, 1945, there was noise on the street. ‘I think we’re free’ my dad said and we didn’t know what it meant. They waited a couple of days and took us out walking and there were white lights (from the Sun) and we did nothing but cry.”

After Lawrence’s session, period six was split between student presentations for the David Labkovski Project, where teacher Francisco Ortega’s world history students explained the meaning and context of Labkovski’s paintings. The event came to a close with Dr. Judea Pearl where he spoke about his own experiences during the Holocaust.

Some students enjoyed the perspective they gained from hearing Lawrence’s story.

“I thought it was really informative and I guess real,” sophomore Miko Martinez said. “She mentioned something I asked (her) and I was so happy.”

The purpose of the assembly was to give students a chance to learn more about the past and relate it to the present.

“It’s an ongoing struggle, this theme or this idea that the individual is fighting for freedom on a continual basis against an oppressive, tyrannical government,” Ortega said. “If you look at the big picture you know that the struggle is an ongoing one and people need to be alert and aware that these things can happen again.”