Changing the talk about sexual assault 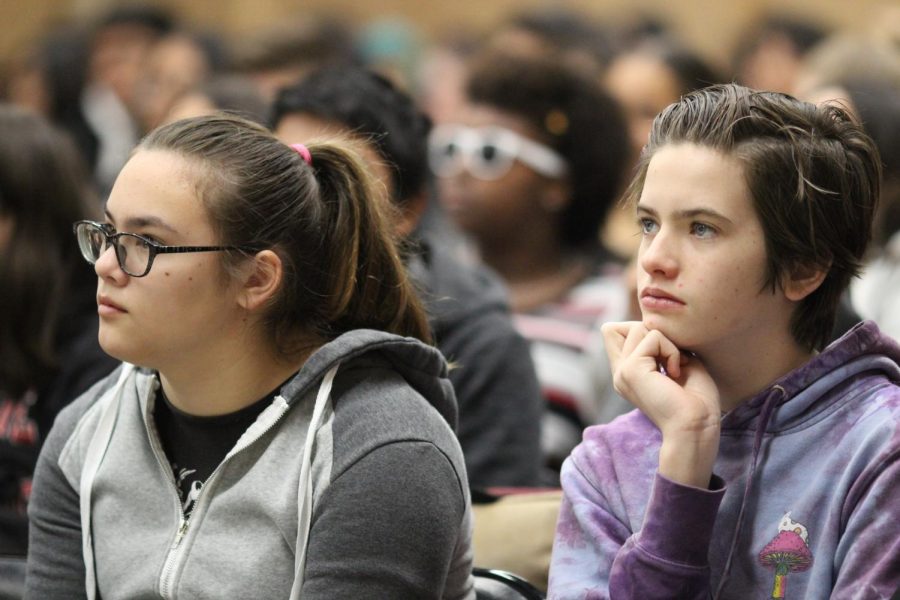 Freshmen Danielle Haiwongse and Quinn Thorpe pay close attention at the "Change the Talk" assembly during 2nd period on Feb. 22.

Contrary to popular belief, about one in six victims of sexual abuse are men and around 80 percent of sexual assaults are committed by someone the victim knows.

On Feb. 22, students from all grade levels attended the Change the Talk assembly from periods two through four. Change the Talk is a program that was created in February 2015 by the National Council of Jewish Women (NCJW) to train teens to educate their peers about sexual violence. Their main objective is to educate students about the causes of sexual violence, helping them understand the meaning of consensual behavior, learning about how to help survivors and understanding the need for cultural change. The teen-led program travels from school to school with their presentations and has been able to visit 3,000 students since its inception.

“We hope that teens will understand what consent is and will be equipped to deal with situations in which they will have to make difficult decisions,” senior and Change the Talk Presenter Rudraj Koppikar said. “They should be able to understand the importance of small things that can make a big difference.”

Multiple teen presenters including Koppikar went over various statistics and definitions regarding sexual violence with the purpose of showing how prevalent it is within our society. They engaged with students throughout the presentation by asking questions about what they already knew about topics such as consent and rape culture. Videos were shown as well to show that people of all genders and backgrounds could be victims of sexual assault and that consent requires a firm “yes” from your partner. They also tried debunking several myths about sexual assault such as women being the only ones that deal with assault, a person being more susceptible to assault depending on what clothes they wear and women not being able to commit assault or rape.

“When I first heard about the assembly I thought it was just going to focus on women’s stuff and I didn’t expect them to talk about how men get raped,” sophomore Jose Ramirez said. “The assembly helped me because I didn’t know much about this stuff before but now I do.”