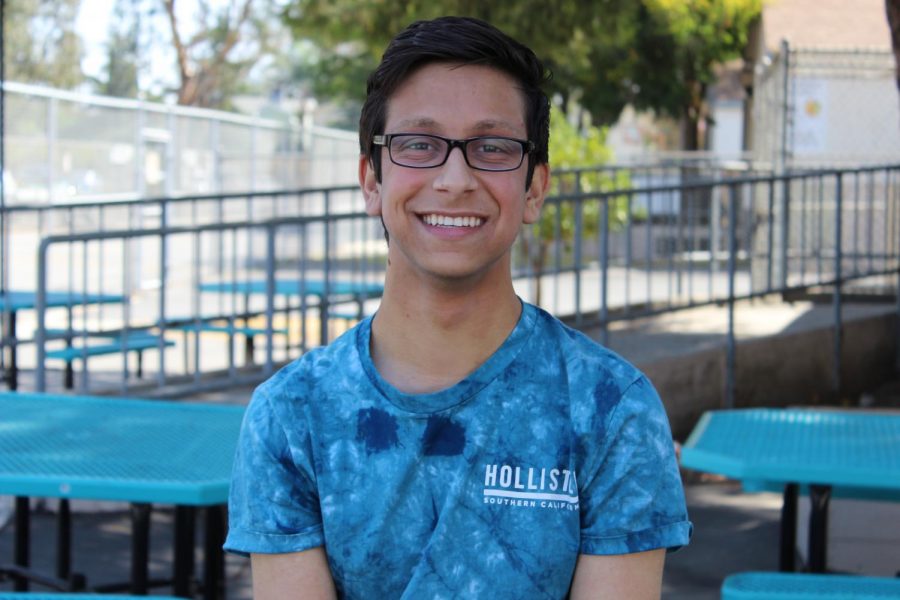 Through a math research project at CSUN, Online Editor-in-Chief Michael Chidbachian has gotten a head start in his math career.

For many people, high school can be a time of finding yourself and preparing for a career, however, senior Michael Chidbachian has gotten a head start on that through a math research project at Cal State University, Northridge (CSUN).

In the second semester of his junior year, Chidbachian decided to pursue a research project in the mathematical field due to his sparked interest in exploring options outside the classroom. Chidbachian reached out to math teacher Leslie Hicks about possible opportunities he could apply for, where she then suggested working on a research paper with a colleague of hers from CSUN.

The research project was with Professor Michael Neubauer and focused on a problem in graph theory. After countless back and forth emailing with Neubauer, Chidbachian had officially started working on the project at the end of his junior year in high school.

“I’m doing it for the experience and the fun of it,” Chidbachian said. “Plus if you get a paper published and you’re just in high school that’s pretty great to put on your record.”

Chidbachian has enjoyed mathematics since he was in elementary school. Even his peers today understand his passion and determination within the subject.

“Since I met Michael back in ninth grade, he’s always been excited to learn math,” Chidbachian’s close friend Kirsten Cintigo said. “And even when he’s faced difficulties with a problem, he’s never been one to give up.”

Since June of 2018, he’s been working with Neubauer in a field of math that he lacks previous experience in. According to Chidbachian, working in the new field has been difficult for him over the past seven months but he feels confident in learning new things.

“I am very happy Michael wanted to work with me on this project,” Neubauer said. “It seemed it was accessible to a bright student who had studied calculus.”

Chidbachian and Neubauer meet up once a week or every other week to discuss the progress they’ve made within the project and try to find solutions to any barriers they face.

“It’s kind of hard sometimes,” Chidbachian said. “Working with the professor takes a lot of dedication and a lot of patience because it’s really difficult to go through the material. It’s so dense, but you just have to set aside a couple hours every now and then to focus solely on that.”

Along with this research project, Chidbachian is a participant in other extracurriculars such as being the Online Editor-in-Chief for The Pearl Post, a member of Board Member Scott Schmerelson’s Board District Three’s Student Advisory Board and is a part of another internship with Schmerelson as a community affairs columnist.

As for college plans, Chidbachian did not apply to CSUN but knows that he is interested in math for a future career. A few of the schools he did apply to include Cal Poly San Luis Obispo, University of California Los Angeles and the Massachusetts Institute of Technology (M.I.T.).

“M.I.T. is my dream school because they’re really social,” Chidbachian said. “Other schools are more hard on education whereas M.I.T. really thinks about the social aspect too and I think that’s really important.”

Although the research paper is still in its first draft and may not be officially published until a couple months from now, Chidbachian has been able to be a part of something that could be a potential breakthrough in the mathematical field.

“It looks like we were able to prove a good result, we are writing it up for publication now,” Neubauer said. “Hopefully we’ll see it in print in a mathematical journal later this year.”

Chidbachian’s ambition and determination in the math field have helped him learn more about what there is to know in the subject and can help him decide his future interests.

“I’m so excited for him,” Hicks said. “I’m really happy for him. It can be the opening to his interest in this particular field, it could be what tells Michael what he’s not interested in and he wants to try something else. That’s what the undergraduate time in mathematics is about, it’s finding out what your interests are, so he has a little bit of a head start.”