Plaza at Victory and Balboa serves as nexus for illicit activity 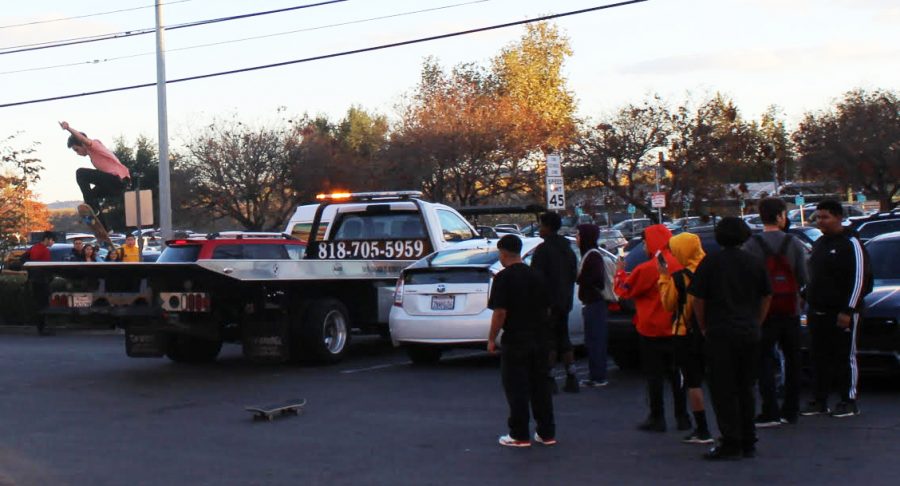 A teenager ollies off the back of a tow truck parked in the plaza while spectators watch and record the stunt.

A teenager skates off the back of a truck, another takes a swig from a bottle of alcohol. The stench of marijuana is thick in the air.

“Usually later (in the day) they fight, they smoke marijuana,” said Lisa Nguyen, owner of a nail salon in the area of the incidents.

Students buying and smoking cigarettes and weed has become commonplace at the strip mall and Orange Line stop at the intersection of Victory and Balboa boulevards. Now, with an increase in policing, the plaza may finally be turning a new leaf.

Over the years, the plaza has grown into an almost veritable black market for teenagers who want to obtain cigarettes, marijuana and wax pens, a weed vaporizer pen that gives its user a near immediate high without the distinctive smell and smoke.

The increase of criminal activity in the area has been a concern for all seven schools in the neighborhood for years now, according to Daniel Pearl Magnet High School Principal Deb Smith, but solutions have been slow to implement. A closed-circuit television system was proposed by a task force to the owner of the plaza who rents it out to various shops, but turned the offer down due to prohibitive costs.

The task force consists of administration from the seven schools in the surrounding area, officers from the Los Angeles Police Department, members of the Lake Balboa Neighborhood Council and officials from Metro. The force has been meeting for months on end, making this issue one of their top priorities.

West Valley LAPD recently increased police presence in the area. Numerous arrests have been made of mostly adults. Parolees were found to be violating their parole in the area and police reported arresting armed suspects according to Smith.

Released records show that from Nov. 7, 2017, to Nov. 8, 2018, LAPD received 24 calls about activity at the shopping center. In that time period, the police were called twice for narcotics, once during school hours and another in the evening. Two other calls were made in regards to assault with a deadly weapon, both occurring during or after school hours. Furthermore, there have been an increase in officer-initiated stops with four since September 2018, as compared to one from 10 months prior to then.

However, shop owners who have operated in the plaza for years say that this is just another cycle in which police temporarily increase enforcement before decreasing it.

34 crimes have been reported from August to November at the plaza.

“There have been cops involved and they keep checking on (the students) and school police also see the kids but nothing happens,” said Rashi Singh, owner of Bubba Gee Market. “They keep trying for a few months but nothing happens. It goes back to normal. That’s how it is. They drink and they smoke and it’s getting bad.”

Singh has lost faith in the ability of police or the community to make a tangible difference. Though she has owned her store with her husband for three years, she is considering selling it and moving elsewhere. Aside from the theft from her shop, she is one of many shop owners who worry that teenagers congregating in the plaza scares off potential customers.

“The customers do not come because they’re scared,” Nguyen said. “They don’t want to see the fights.”

Smith, along with some of the shop owners, believe that the high number of students loitering is due to the donut shop owner being too friendly with them. She has also stated that students mainly from Birmingham Community Charter High School (BCCHS) have reported to their administration that Stop-In Donuts sells individual cigarettes for a dollar to students, though there has yet to be evidence supporting these claims and owner Heng “Lucky” Oum has denied the allegations.

During a task force meeting on Oct. 4, BCCHS Dean Joseph Granish told attendees that parents must drop their children off at school in the mornings, not at the shopping plaza.

LAPD officers at the meeting stated that there will be an increase of police units near the Orange Line, the area of most concern according to Officer Gretter.

Oum is popular and friendly with the students who shop at his restaurant, greeting his regulars with a special handshake. He is a father to two and is blamed by his neighboring business owners for allowing children to loiter around their establishments.

“I tell them to go home but they do not listen,” Oum said.

Oum is scared of reprisals if he tries to be forceful in getting students to leave. There have been violent fights in the area in the past, several of which have carried on into the alley behind the plaza. He claims to have been threatened by the police to close his business and was asked to refuse service to students. However, students make up the vast majority of his customer base.

There seems to be no clear solution to the problem. Though LAPD will continue to maintain their presence in the shopping center and the Orange Line, store owners may not see any improvement for some time.