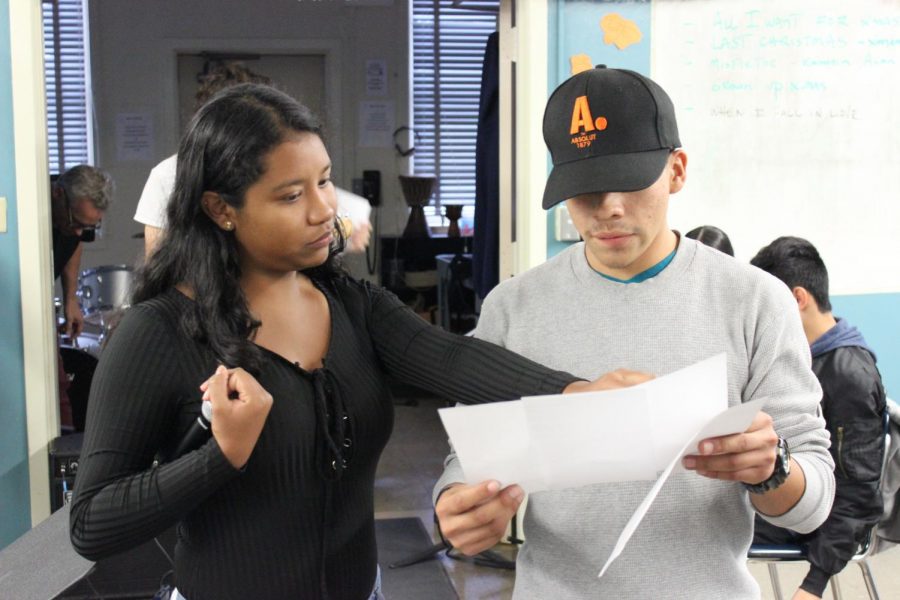 Juniors Ximena Renteria and Daniel Raymundo go over lyrics for the 2018 Winter Show.

With the holidays right around the corner, the school’s musicians are preparing to perform classic songs including “All I Want for Christmas Is You” by Mariah Carey and “Last Christmas” by Wham!

The Almost Acoustic Holiday Concert will be held on Dec. 6 in the MPR, which will be decorated for the occasion.

The show, which has about 15 songs scheduled, was put together in a very short amount of time. The musicians have some doubts regarding their ability to pull off the show in the few weeks they had to put it together.

“Honestly since it’s a little last minute,” junior Anna Equils said. “I don’t think it ’ll be as put together as we’d all hoped, but I do still think that it’ll be a good show and it’ll be fun. But we won’t be as prepared as we would’ve liked.”

The show will be similar to the previous one in 2016 as there was no holiday show last year. Music teacher Wes Hambright has confidence in his students and feels they have the potential and capability to make the show the best that it can be.

“With these musicians, I’ve told them many times that anything is possible and they’ve been working really hard and that’s really all it takes for this group of musicians,” Hambright said. “With a little hard work they can do anything, they really can.”