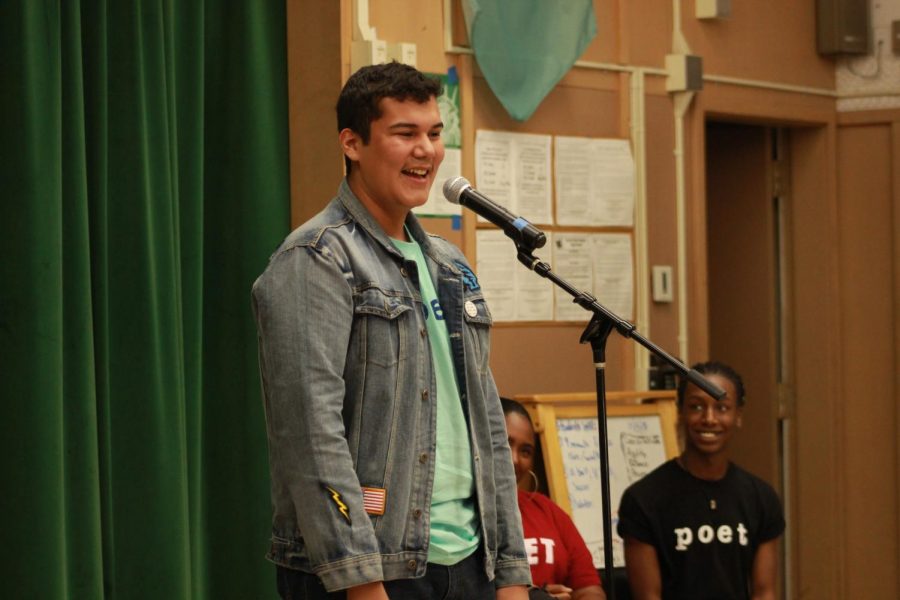 Rodrigo José Sigala performed his poem and response during the Get Lit performance on Nov. 15.

Students were able to attend the annual Get Lit Poetry assembly on Nov. 15 during third and fourth period. They not only heard poems that they may have resonated with but also shared poems of their own.

“I love watching the students’ faces light up when they hear something that relates to them and especially when one or two are brave enough to share their own words,” said Monique Mitchell, a Get Lit poet and teacher.

Get Lit is an organization that works to help young people uncover their artistic potential by traveling to different schools and performing for students. Poets Mya Rigoli, RJ Sigala, Nia Lewis and Tyris White came to Daniel Pearl Magnet High School (DPMHS) along with their teacher Mitchell and performed classical poems ranging from “ The Surface of Water” to “Jada” by Tupac Shakur and then performed a response.

“It had some really interesting poems,” junior Katharina Hanna said. “A lot of the time the poems can become really liberal and political based but this year the poets that came to us seem to be more personal and actually touched on issues that are very important to teenagers like us.”

English teacher Ron Baer leads the DPMHS Get Lit team that competes every year at Get Lit’s Classic Grand Slam. Last year, then juniors Rudraj Koppikar, Kirsten Cintigo, Emely Felix, Justin Dumindin, and then sophomore Andi Mendoza attended the Grand Slam and were able to compete against other schools. The auditions for this year’s team will be held in the first week of December, with sign up’s through Baer.

“I’m trying out in November and I hope Mr. Baer chooses me because he’s been talking to me a lot about it and hopefully I actually do get on the team,” Hanna said.