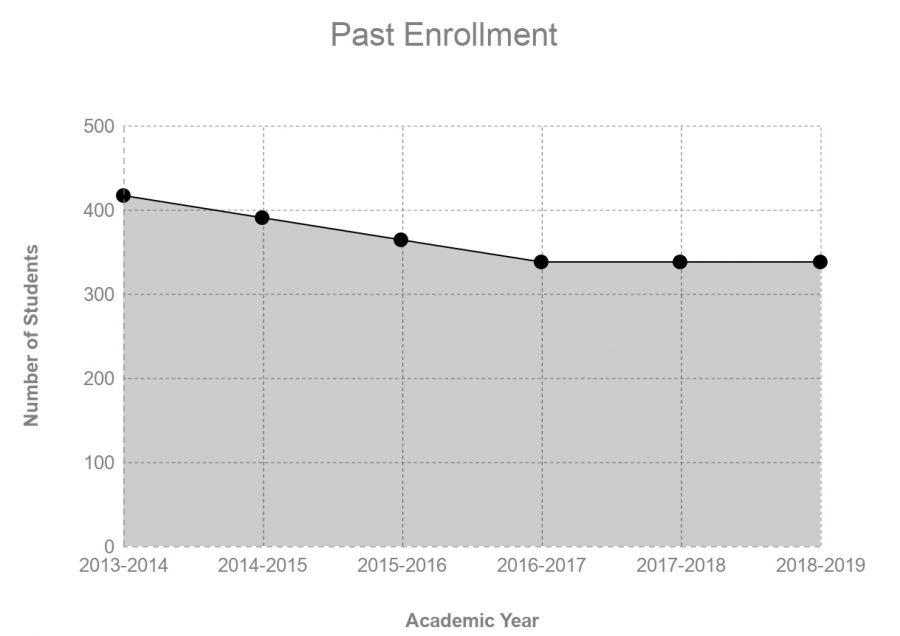 Enrollment has been stagnating since the 2016-17 school year

Back in early September, Principal Deb Smith filed an appeal to local Superintendent Joseph Narcoda and the H.R. Department after the school’s enrollment numbers were rejected. However, the appeal wasn’t approved and is resulting in the loss of an English teacher position in the spring semester.

The decision regarding the appeal was decided after norm day. Norm day is the day when the number of actively-enrolled students in the school is counted. This information contributes to the number of teachers a school receives based on a norm chart made by the district.

After norm day, the district decided that DPMHS didn’t have the sufficient amount of students needed to keep a teaching position open as enrollment fell below the 340 mark.

Smith’s appeal depended upon a student who wasn’t accounted for by the district on norm day due to the student’s issues with their previous high school. The appeal was rejected by the district because none of the teachers took attendance of the student on that day.

“The teachers didn’t take attendance because Monroe High School hadn’t released the student,” Smith said. “They should not have taken attendance on him that day.”

The only other option Smith had to keep the position open would be to pay out of the school’s Title 1 funding. After checking the funding received this year, it was clearly evident to Smith that this would not be possible. Paying with the school’s funding would require using all of the school’s available money.

“We would have so little money left in the ‘bank’ that I would be really scared to buy paper, toilet paper,” Smith said. “It would be very worrisome.”

However, Smith’s decision to eliminate the teaching position leaves ninth grade students without a teacher next semester. Currently, the students are being taught by Tanya Calcote, a teacher that was displaced from Portola Middle School. Before that, the students had substitute teachers for the first two months of the semester.

Calcote’s position was eliminated from her old school. She is not a substitute teacher but instead has English teaching credentials and will be teaching the ninth grade students for the rest of the fall semester. Calcote might continue working for DPMHS next semester but in another position needed by the school.

The inconsistency of the English teacher frustrated freshmen Valeria Luquin who felt she wasn’t being challenged academically.

“I didn’t really like it because for a while we didn’t really have a structure in the classroom,” Luquin said. “I didn’t feel like i learned really.”

Next semester, many scheduling changes will occur to ensure the ninth grade students have an English class.

“What they’re discussing is moving all of the ninth grade students into different class compositions,” Smith said. “In other words, Mr. Baer, Ms. Barry and Ms. Chavira will also pick up a ninth-grade English class.”

The addition of a ninth-grade class will also affect the teachers. Adding a course means they will now have to prep for an extra class along with the others they are already teaching.

“When you think about the other teachers, they’re going to pick up another prep so it’s a lot,” Smith said. “It’s hard on teachers.”