Freshmen learn about the dangers of drugs during Red Ribbon assembly 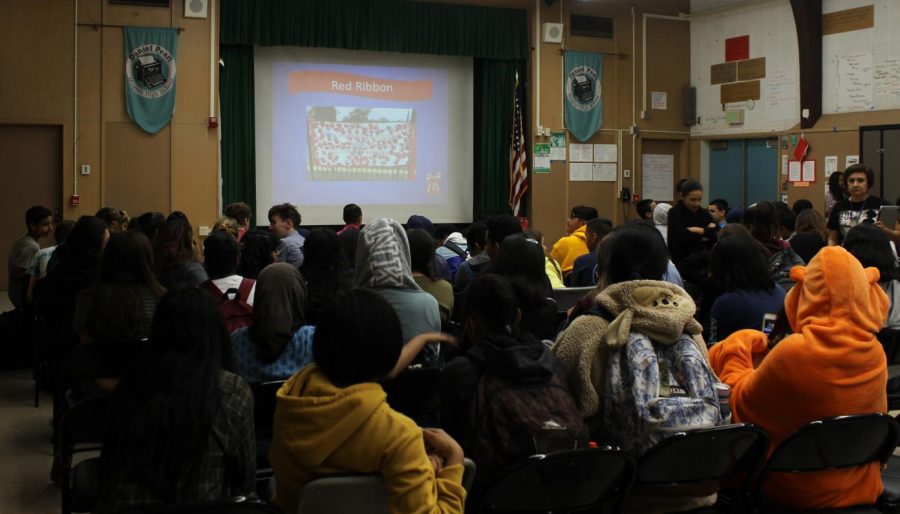 The National Council of Alcoholism and Drug Dependence (NCADD), a nonprofit organization based in Van Nuys, California, held a presentation about Red Ribbon Week to the ninth grade class on Oct. 29.

In a presentation led by Health Educators of NCADD, Jennie Soniega-Sherwood and Lizbeth Vivar highlighted the negative effects of marijuana and explained the dangerously quick spread of this drug.

“The trend in regards of marijuana is increasing, especially in Los Angeles County, where it has suppressed national levels,” Soniega-Sherwood said. “It’s wasting our doctors and physician’s time on things that are preventable.”

Red Ribbon week began as a way to honor Enrique “Kiki” Camarena, a drug enforcement agent who was tortured to death on Feb. 7, 1985. This commemoration began in his hometown of Sacramento in order to raise awareness of deaths caused by drugs. Originally his family would wear red pieces of satin with it later developing into red ribbons. Since then their message has spread nationwide, with Red Ribbon Week taking place this year from Oct. 23- Oct. 31.

Soniega-Sherwood and Vivar also showed students overdose procedures by having volunteers participate in a demonstration. Volunteers were told to lay on their side, while it was explained that this is the safest head position to be in when overdosing.

Freshman Jazz Mccullers was one of these volunteers and believes it’s very important to be well informed.

“I felt that it would help me learn what to do in those types of situations,” Mccullers said. “Marijuana is a bigger threat than most people expected it to be.”