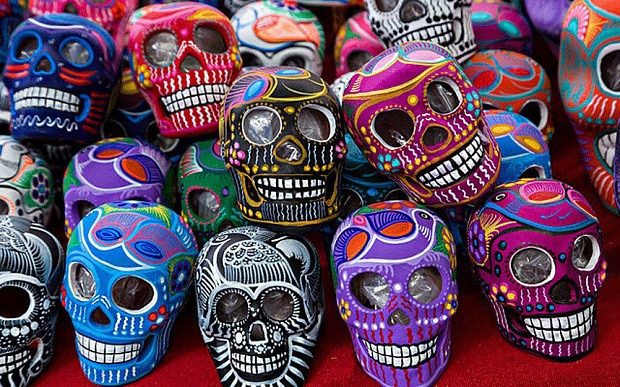 The sacred holiday of Dia de los muertos has been commercialized rather than celebrated.

As Halloween approaches, many people will head to stores to stock up on decorations, costumes and candy.

With Halloween comes Dia de los Muertos, or the Day of the Dead, a special holiday in Mexico and Latin America that celebrates life and death on Nov. 1 and 2. As this day has gained a lot of traction in recent years with people across the nation, it has also gained the attention of American companies seeking new things to profit from it.

Many corporations, such as Party City and the 99 Cents Store have begun profiting from this holiday. It is appropriate to sell small, respectable decorations. It is, however, unacceptable and wrong to sell full costumes called “Day of the Dead Sombrero Señor Costume” by Party City or decorations labeled “Hola Halloween” on them at the 99 Cents Store.

Day of the Dead has recently come into fashion by the new generation of Mexican Americans. This new generation has brought the culture into popularity among society, which is great because it pushes us further regarding the tolerance gained from others. However such new recognition came at a price known as cultural appropriation. Around this time, it takes the form of stereotypical costumes and the misidentification of sacred holidays, such as Day of the Dead.

Day of the Dead is a cultural holiday dedicated to commemorating deceased loved ones. It is a sacred day of remembrance celebrated by visiting the burial sites of the dead to clean and decorate their graves.

The graves are embellished with marigolds often referred to as “flores de muerto,” papel picado, “calaveras de azucar” or sugar skulls, and a special type of bread called “pan de muerto”. Day of the Dead is also celebrated by making an “ofrenda” or altar honoring the spirits of loved ones with their favorite foods, drinks and music. Ofrendas are then brought to the graves where people gather to share memories with food and music.

In 2013, Disney attempted to trademark Day of the Dead and secure the naming rights of the holiday to use it on merchandise and the late 2017 Pixar movie “Coco.” They rightfully withdrew their trademark application due to a very justifiable wave of backlash from the Latino community. This act should be considered unethical and shows just how far these greedy companies will go to make money. No business or corporation should make a living based on different cultures and what is important to them.

The corporations that exploit and capitalize from peoples’ traditions need to know that these are real cultures, not an easy cash grab to profit from.