Strike two against LAUSD due to “insulting” offer 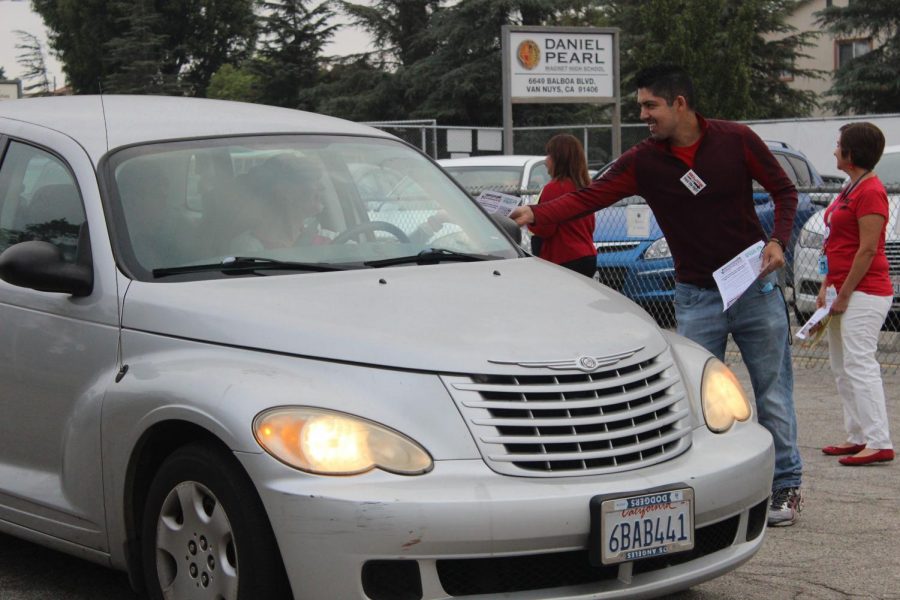 History and Government teacher Francisco Ortega hands out fliers on Oct. 9 to inform parents about the possible teacher strike.

As mediation efforts come to an end after weeks of negotiating a contract between Los Angeles Unified School District (LAUSD) and the United Teachers Los Angeles (UTLA), a potential strike looms in the horizon.

On Oct. 15, Principal Deb Smith issued a statement through the school’s grading and messaging website Schoology stating that if the teachers do strike, the district will provide central office staff to schools along with “outside vendors” to “ensure that student operations remain seamless on our campus.” LAUSD has also created a family resource guide to help parents learn and prepare for a possible strike and what will happen if a strike occurs.

Mediation between the district and the union started Sept. 27 but have not come anywhere near an agreement with a new deal. Efforts ended on Oct. 12 after the third session in three weeks. On Thursday (Oct. 25) afternoon, teachers are expected to take their protest to major intersections throughout the city.

Before mediations, LAUSD Superintendent Austin Beutner wrote an article published in the Los Angeles Times on Sept. 25 proposing a new deal to UTLA, before privately sharing that information with UTLA first. The deal was that teachers would receive a 6 percent pay raise over the next two years, 3 percent for the 2017-2018 school year and 3 percent for the 2018-2019 school year if the district’s financial report shows positive projections for the 2018-2019 and the 2019-2020 years.

“(Beutner is) saying that he’s offering us a 6 percent raise but he’s offering us a 3 percent raise retroactive for one year only,” said Daniel Pearl Magnet High School (DPMHS) union representative Jennifer Walker. “And then another 3 percent, if the finances of the district are in order, so that’s not a real offer that we could rely on. So everything is just on hold now until the mediation process finishes.”

However, UTLA is asking for a 6.5 percent pay increase along with class size reductions, limits on standardized testing and accountability measures for charter schools. District officials say that the deal would increase the already $500 million deep deficit for the current school year by $813 million. UTLA called the district’s offer “insulting” stating that the proposal would make it “more difficult to qualify for secure health care in retirement.”

If UTLA decides to strike than it would be the first strike in LAUSD since 1989. In a recent statement by District Attorney David Holmquist, “the only reason UTLA participated in mediation was to ensure that it could move quickly to a strike.”

“I would like to get the understanding that what public schools are doing is really important and really hard and deserving of more time and attention from the central office and from the school board mainly,” Walker said. “Also, the teachers deserve a raise, each school deserves a nurse, I believe there is too much testing mandated by LAUSD and I think if we just did the testing required by the federal government – that’s plenty.”