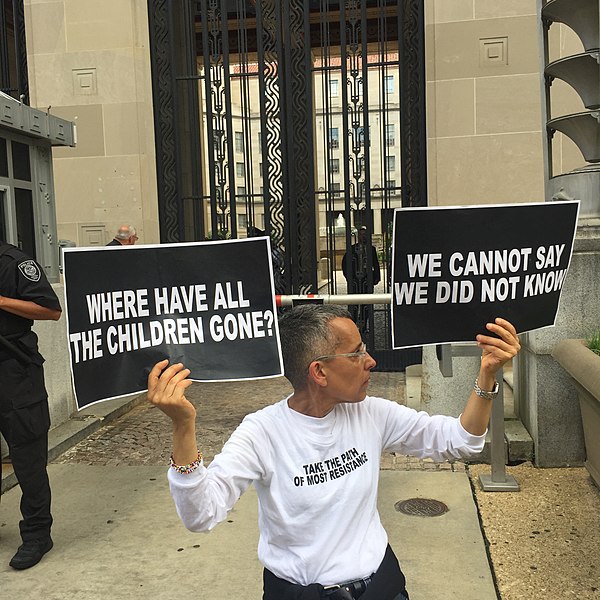 A protestor at the Woman Disobey protest in Washington D.C in June holds up signs condemning family separation at the border

After being separated for three and a half months, a Honduran mother is finally reunited with her 3-year-old son only to come to the agonizing realization that her child is traumatized, crawling away from her open arms.

This is in result of the family separation policy, better known as the “zero tolerance” policy, enacted by President Donald Trump’s administration back in April. This policy targeted migrant families who came to the United States border seeking asylum and separated almost 3,000 families since it started, according to Health and Human Services (HHS).

Currently, Even though 2,157 families have been reunited, the number of detained migrant children in more than 100 shelters around the U.S. has significantly increased from 2,400 children in May 2017 to 12,800 children this month.

As more and more people heard the news and protested this horrible policy, Trump found himself forced to sign an executive order that would keep families together at the border. It would also return the already separated children back into the hands of their desperate and worried parents.

The frozen and non-emotional responses given by the children as they are reunited with their parents clearly shows the significant trauma they endured.  The Trump administration was beyond careless when enacting this policy. They failed to think about how these families would be reunited or the health issues that would surface because of it.

The policy is detrimental and these distraught parents have gone to extreme lengths as a result of their children being taken away. One father was separated from his wife and 3-year-old son back in May and suffered a mental breakdown. He was found dead on the floor of his jail cell on May 13 after committing suicide. Many children are afraid to be taken away from their parents again and refuse to let them out do their sight.

A young girl was reported dead on Aug. 1, shortly after being released from a detention center in Dilley, Texas. The child’s name and age have not been released. Although a cause of death hasn’t been identified, Mana Yegani, a Houston immigration lawyer tweeted that the toddler died because of a respiratory illness that she caught from another child at the detention center.

The policy began as a way to limit the amount of families that try to cross the border illegally. Although seeking asylum is legal, Trump says that asylum seekers are trying to invade and break into our country.

“Immigration must be based on merit,” Trump tweeted on June 24. “We need people who will help ‘Make America Great Again!’”

However, many of these asylum seekers are ‘invading’ our country to pursue a better future for them and their kids. The negligent care given at the detention centers has caused a lot of harm to asylum seekers who are simply looking for a higher quality of life.

The Trump administration must appoint someone to deal with the reunification of the separated families exclusively and all families involved with this policy must have access to both physical and mental help after the horrible experience they were forced to go through.