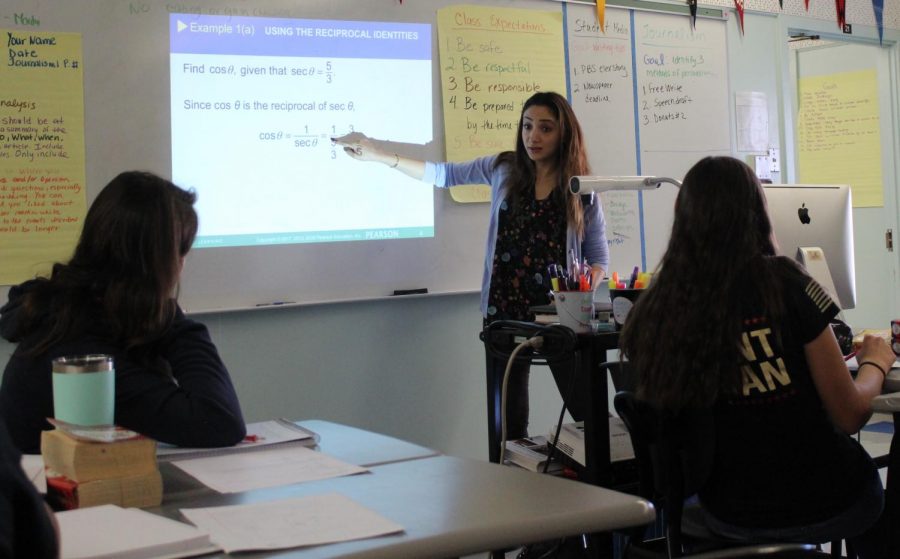 New math classes like Math 240 and Edgenuity Pre-Calculus have been offered to students due to the lack of a math teacher position.

This new school year introduced two new, unconventional ways of teaching math in high school: one is online through the program Edgenuity and the other is a college class brought on campus from Los Angeles Valley College.

“I feel that it’s giving students the best of both worlds,” counselor Martina Torres said.

Last year at a School Site Council meeting it was announced that the funded Title 1 position held by math teacher, Anna Felix, would be closed. This led to the struggle of fitting all the needs of students into just four periods with only, remaining two math teachers available.

The original plan had been to keep Daniel Cramer and Leslie Hicks, but to add in an auxiliary teacher and a college teacher. However, due to unforeseeable circumstances, Cramer moved to a different school during the summer and only one math teacher remained.

To resolve this issue, Lori Seo was hired for the vacant math position. And instead, an LAVC 240 Trigonemtry math class was made available and Edgenuity was provided for those students who wished to take pre-calculus but did not want to take a college course. While this may have cleared up some of the bigger concerns, the question remained whether these new classes would be preferable to the traditional method of teaching.

In the past, Edgenuity had been used for online classes like AP Spanish Language and Culture and Spanish 2. On-campus, college classes were also previously available but those courses were optional. While not required to take these classes, students are encouraged to take four years of math as it looks better when applying to colleges.

Through Edgenuity, students teach themselves with an online program and although there is no teacher present, math teacher Sunita Maxwell from Mulholland Middle School comes in to help supervise during period 1. Much of the material includes instructional videos, with students moving at their own pace with practice and review problems. For students who aren’t strong independent learners, it can prove to be a problem.

The college course began the third week of school with Syuzanna Aghazaryan and proved that it would be a greater challenge than most students were accustomed to. The class moves much faster and there is an actual professor, yet students had to pass the placement test in order to be enrolled. Nevertheless, students will earn applicable college credits.

“I think it will help me become a stronger independent learner,” senior Lauryn Uhlenberg said. “It’s really up to me how much I want to study and how well I want to do in this class.”