Prepare to be horrified by venomous sci-fi thriller 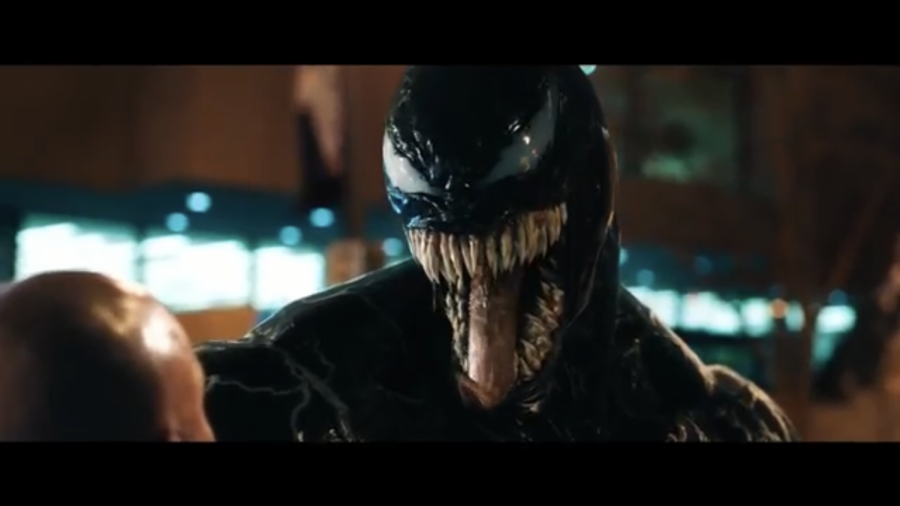 "Venom" will premiere in theaters on Oct. 5.

Starring as an anti-hero, Venom is born as Eddie Brock (Tom Hardy) bonds with an alien parasite known as a symbiote in Sony’s spinoff trilogy of the beloved Marvel Comics character releasing Oct. 5.

Working on an investigative story about the Life Foundation, photographer Eddie Brock comes in contact with an alien symbiote that fuses with him and grants superpowers to become Venom. These powers can only exist as long as the symbiote has a host, this symbiote’s host being Brock. This isn’t the only symbiote however as Carlton Drake (Riz Ahmed), leader of the Life Foundation, is experimenting on other symbiotes. As the films antagonist, Drake will bond with a symbiote as well to become Riot. Other cast members include Michelle Williams as Anne Weying, Brock’s girlfriend.

In the Marvel Universe, there are many symbiotes who have bonded with hosts such as Carnage, Scream and She-Venom. Some of these symbiotes have been noticed in marketing trailers, leaving the guess if they will be seen in full action.

This isn’t Venom’s first time on the big screen, as he appeared in Sam Raimi’s “Spider-Man” trilogy, played by “That 70’s Show” actor Topher Grace. Although Venom is a Spider-Man antagonist, the web-swinging hero will not be connected to the film as he is a part of the Marvel Cinematic Universe (MCU) but a cameo featuring Spider-Man actor Tom Holland has been reported back and forth. Due to being separate universes, the famous white spider logo on Venom’s chest in the comics will not be featured in the film.

Ruben Fleischer, director of “Venom,” stated that the film is planned to be more violent than any other other Marvel film. The movie’s rating, however, has not been released.