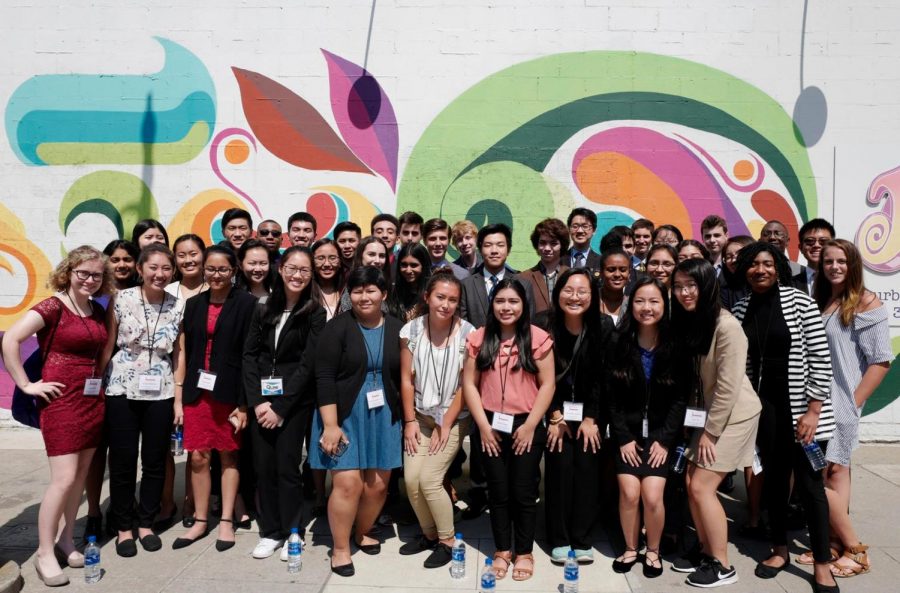 All 41 JCampers pose outside before heading to their last networking event on August 3.

This past summer, I spent a week in Detroit, Michigan, improving my journalism skills through the Asian American Journalism Association’s summer program JCamp.

It’s a six-day long program where 42 students from all over the country are selected to be immersed into the world of journalism. They attend various sessions with different speakers that cover multiple topics. Students also get hands-on training in various areas such as writing, photography, television broadcasting, online media and reporting.

On the first day, the 40 other campers and I listened to three opening speeches from two former JCampers and the Media Diversity Director, Alicia Nails from Wayne State University. Former JCamper and Exposure Labs founder Jeff Orlowski also video chatted with us that night about how the program helped him to become a feature documentarian. We then participated in a group icebreaker, followed by a meeting with our individual group leaders.

I was a part of the writing group, led by Clea Benson, a Deputy Editor at Politico. She first introduced herself and as a group, we started discussing story ideas as everyone was supposed to write an article by the end of the week.

For the next two days, we spent our time at Wayne State University having individual talks with professional journalists. Some of the speakers included MSNBC’S Richard Lui and CBS News’ President David Rhodes.

We also spent some time in Downtown Detroit interviewing and gathering information for our stories. For my topic, I decided to focus it on the current trend to ban plastic straws. One key lesson I learned with reporting that differed from The Pearl Post is that it could take as many as 30 sources just to develop one fact in a story. And even if you don’t use everyone’s quotes, it’s still beneficial to have them.

On the final day before leaving JCamp, we attended three more presentations. Speakers included ESPN’s Jemele Hill, The Undefeated’s Kevin Merida and writer Donna Britt. We were also given a thorough session on how to network by NBC’S Chief Diversity Officer Craig Robinson and WRC-TV General Manager Jackie Bradford.

This specific session was intended to prepare us for our final event where we were scheduled to attend a dinner that night and network with other professionals in the journalism industry.

Upon arrival, the other campers and I talked about how worried we were to make a wrong impression, especially since these could be the same contacts to land us our very first job out of college. Yet after a few pep talks and a look back at our notes from earlier, we made it through the night and came out with loads of business cards.

We then ended the day by heading back to our hotel and partying it up till it was time for us to leave. Originally, we were supposed to say our goodbyes and head to bed by midnight. However, none of us could bear the thought of not taking advantage of any extra time we had together. So instead we all stayed up till 4 a.m., which was when some of the other campers and I had to leave for the airport to catch our flights home.

Even though we were all so tired, I could feel the love everyone had for one another when we said our final goodbyes. At the beginning of the week, I was a bit overwhelmed by my fellow JCampers as some of them had been so accomplished already. However, in the end, we were like a family. I felt like I had known them for years rather than days.