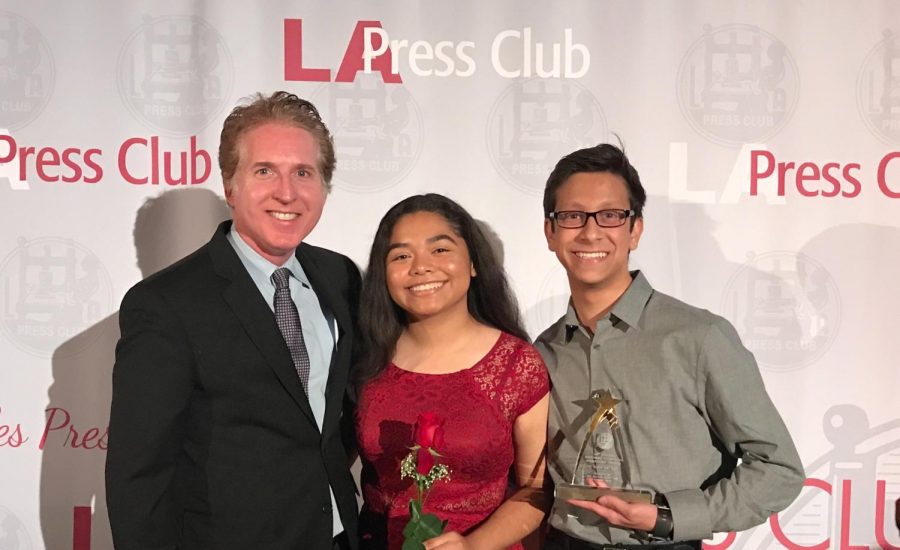 CORRECTION 8-28-18: Our entry was disqualified because it was not from the 2017 eligibility period. (We submitted one from 2018). So Los Angeles Press Club’s Best High School Newspaper goes to Sunny Hills High’s The Accolade in Fullerton.

As in previous years, the ceremony took place at the Millennium Biltmore Hotel in Downtown Los Angeles. The event was crowded with popular journalists such as LA Press Club President Chris Palmeri, Pat Harvey of CBS, Cher Calvin of KTLA, Robert Kovacik of NBC4 and Lester Holt of NBC’s Nightly News.

The event held its own red carpet before the start of the dinner which was followed by a silent auction filled with memorabilia. Following dinner, and alongside the distribution of dessert, the award ceremony began. Kovacik and Calvin opened it up with a speech and proceeded to announce the night’s winners.

The Pearl Post was nominated for two awards, “Best News Website” and “Best High School Newspaper.” The online publication did not place for “Best News Website” with the winner being Cal State Northridge’s website The Sundial. In the student newspaper category, The Pearl Post was up against The Accolade from Sunny Hills High School for the second consecutive year, with The Accolade winning first place last year. This year the judges commented to say The Pearl Post displayed “…a college-level effort. Well written, pleasing layout and photography and even their own news poll!” This is the seventh year in which The Pearl Post have been named finalists by the LA Press Club.

Besides the awards given to the categorial winners, honorary awards were handed out to certain individuals.

Raif Badawi was awarded The Daniel Pearl Award for his courage and integrity in journalism. However, he was not able to accept it since he’s currently serving a 10-year sentence, plus 1,000 lashes, in Saudi Arabia due to his activism online for women’s right to drive. This sparked controversy as Badawi is still serving his sentence despite women in Saudi Arabia gaining the right to drive this past week. His wife, Ensaf Haidar accepted the award on his behalf. Dr. Judea Pearl also gave a speech about Badawi’s bravery for his online reporting that was similar to his slain son, Daniel Pearl.

Kimi Yoshino from the Los Angeles Times was given The President’s Award for her impact on media. She currently serves as the Business Editor for the Times and has been on the Times’ staff since 2000. She was introduced by her fellow assistant editor Andrea Chang.

The Press Club also named country singer legend Dolly Parton as the recipient for the Bill Rosendahl Public Service Award for her journalistic contributions to civic life. This is due to her efforts of creating the Imagination Library, an organization that provides books to preschool children every month to encourage a love for reading. Parton was introduced by her business partner, Emmy-nominated producer Sam Haskell III.

“When you get into a position to help, you should, if you can,” Parton said.

Lastly, NBC Nightly News’ own anchor Holt was given the Joseph M. Quinn Award for lifetime achievement. Holt has reported on many events such as the Parkland High School shooting, the PyeongChang Winter Olympics, as well as the first Presidential Debate between Hillary Clinton and Donald Trump.

“I am incredibly heartened that for the first time in my 37-years, people are regularly stopping me to say ‘thank you, thank you for being a journalist,’” Holt said in his acceptance speech at the end of the night. “To the young people in the room who think they want to do this for a living, I’ll tell you that journalism remains a noble calling. A free and independent press will remain a pillar on which our democracy rests.”

To read about our feature in the LA Daily News regarding the win, see their story.