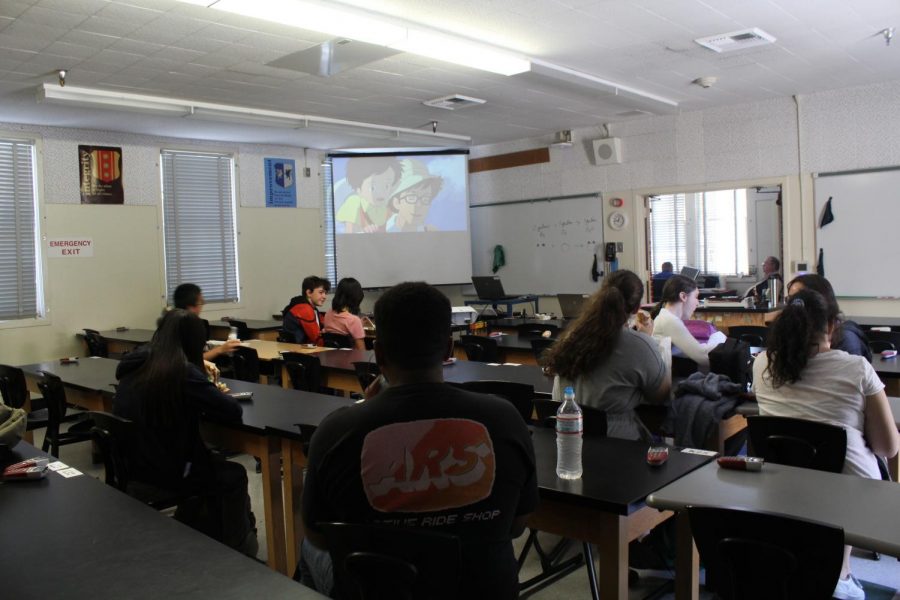 Students gather in Room 6 during the anime portion of Anime and Gaming Club, which meets on Thursdays during lunch.

For many students, Anime and Gaming Club is something to look forward to when wishing to escape reality by alternating between anime episodes and new video games each week.

In 2008, student Stephanie Dorsi came to science teacher Stephen Schaffter with an idea to start an anime and gaming club in hopes it would interest her fellow classmates. Schaffter agreed it would benefit the students and decided to sponsor the club.

“She wanted to do something nice for the students that didn’t have a nice club,” Schaffter said. “She thought those people would be interested in the things she was interested in, which was anime and gaming.”

The club began at Birmingham Community Charter High School (BCCHS), but after Daniel Pearl Magnet High School (DPMHS) became a separate school, the club followed with it. It is now the oldest continuing club on campus.

Students can walk in any time at lunch on Tuesdays and Thursdays, Tuesdays being gaming and Thursdays being anime. Schaffter hopes to change the current schedule of meetings and hold one meeting for both anime and gaming together.

For many students such as freshman Shannon Sullivan, the club helped her explore different forms of entertainment and connect with people with similar interests.

“It opens me up to a lot of other entertainment and it’s a welcoming experience to hangout and have fun,” Sullivan said. “The club has also introduced me to a lot of my favorite shows.”

The club accomplishes its goal of bringing people together into a laid-back environment and providing a wider perspective on what anime and gaming really is.

“It’s stress free, you can come in whenever you’d like, it’s a good place to hangout and have fun,” Club President Maia Hito said. “You might meet people who share your same interests.”