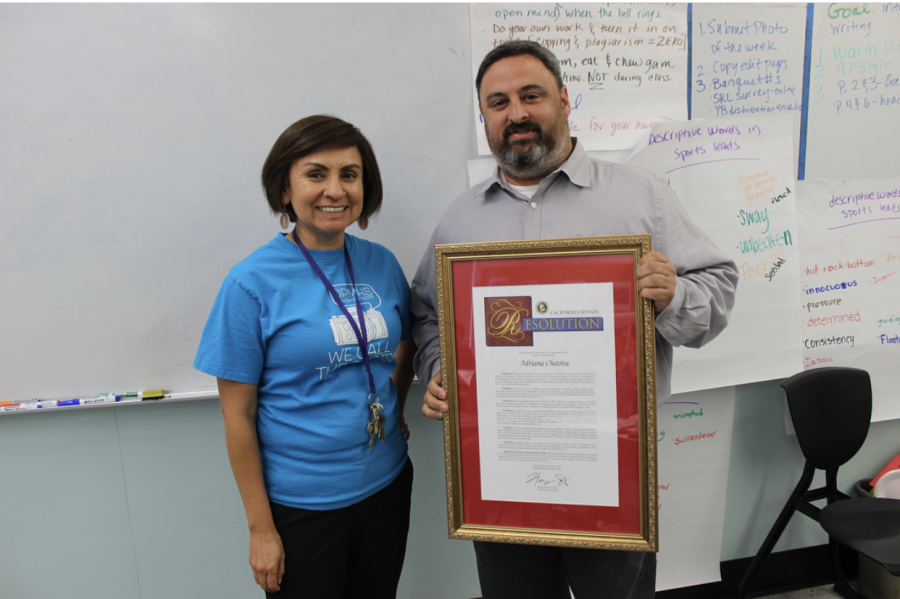 On May 30, Adviser Adriana Chavira was surprised with a plaque sent from California Senator Henry Stern for being named teacher of the year by the Encino Chamber of Commerce.

Journalism teacher and adviser for The Pearl Post and Prestige Yearbook publications Adriana Chavira was surprised to hear that she had won the Teacher of the Year award from the Encino Chamber of Commerce.

The Encino Chamber of Commerce is a Tarzana-based organization whose mission is to support and strengthen local businesses as well as promote associations in the community. The organization is host for a variety of special events made for the community, such as Bowling Night and this year’s 24th annual Teacher of the Year Award Dinner. This year, Chavira was among 16 other nominees. The dinner took place on April 26 at the Hilton Hotel in Woodland Hills.

“They were all very impressive, very accomplished and I was blown away by it,” Chavira said.

Chavira was originally a reporter but was inspired to become a teacher after summers spent volunteering at a journalism camp for teens. She has been a teacher for 15 years and is not the first teacher from Daniel Pearl Magnet High School to be nominated. Last year English teacher, Leah Pevar, was among several nominees for this award.

“I’m happy for them. I think it speaks a lot to who we are to have such great teachers here at our school,” Principal Deborah Smith said. “I think it gives our school great recognition in our community.”