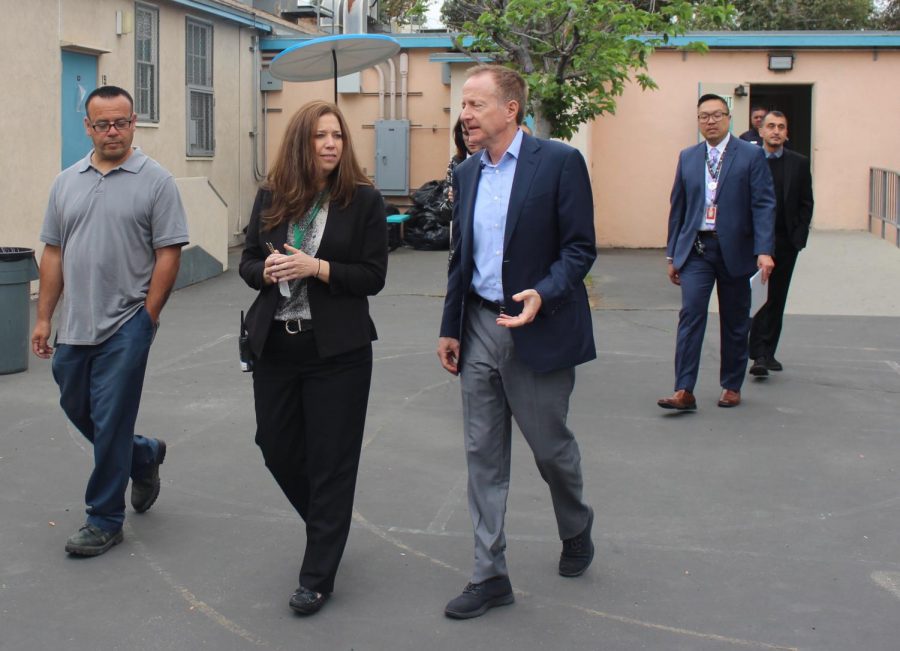 During his visit to Daniel Pearl Magnet High School on Thursday to honor district Employee of the Year Juan Amezcua (left), Superintendent Austin Beutner (right) gets a tour of the campus by Magnet Coordinator Nicole Bootel.

Initially starting off with a few firm handshakes and the clicking of cameras, new Los Angeles Unified School District Superintendent Austin Beutner’s campus visit on Thursday was filled with stories of relatable experiences, photos with staff and a celebration of custodian Juan Amezcua, who was named  the district’s 2018 Exemplary Classified Employee of the Year award.

As he and several other district advisors skimmed through past Pearl Post issues, Beutner told stories about the time he spent as a publisher of the Los Angeles Times. The short anecdotes allowed student journalists to get a better feel for Beutner’s amiable personality and approachability.

One of many concise discussions between the superintendent and Amezcua revealed that the custodian has been working for LAUSD for nearly 20 years, he’d been with Daniel Pearl Magnet High for five and had perfect attendance for four consecutive years. Bootel acknowledged Amezcua for always going the extra mile to better the student’s health and safety on campus.

“I’m appreciated for all the hard work I do on a daily basis,” Amezcua said. “It feels good to be recognized.”