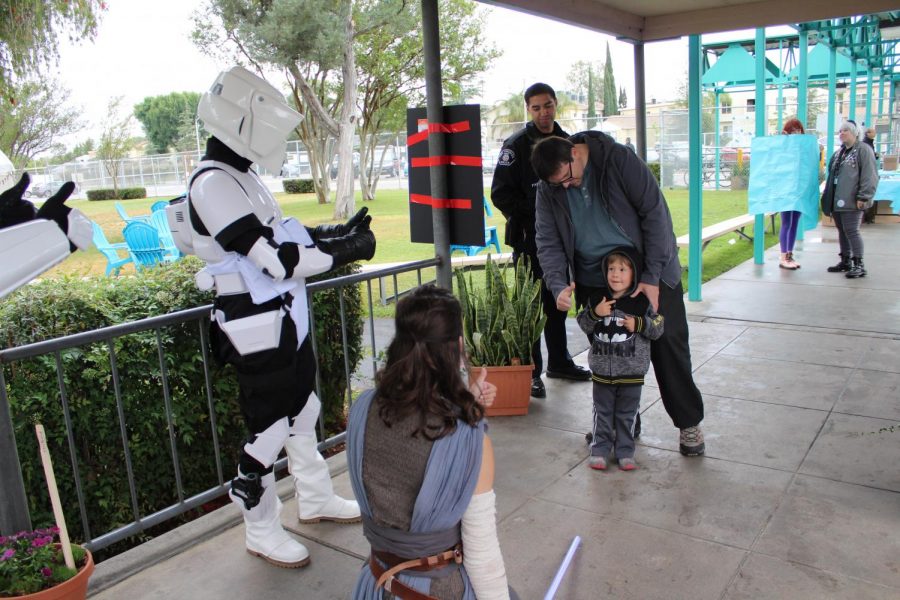 Giving thumbs up to a guest, members of the 501st legion and Rebel Troops wait in front of the school by the Grove to interact with Star Wars fans.

Before PearlCon opened to the public, teachers James Morrison, Stephen Schaffter and Charity Price had to think on their feet. Almost everything outside for Saturday’s convention was dampened from the morning rain.

“It was harder than it normally was but then again when you pick a date that far in the future you can’t be guaranteed what the weather is going to be,” Schaffter said.

Despite the rain, Daniel Pearl Magnet High School held its third annual PearlCon on May 12. The event was a huge success, earning a net profit of more than $2,000 for the PTSA and included its first ever car show.

After taking down a comic book backdrop near the front entrance originally placed for visitors to take photos, PearlCon officially opened. Tables were lined up at the front gate to buy admission, comic books, t-shirts and pins. Tent booths leading up to the Multi Purpose Room (MPR) had various sponsors to promote their brands such as the Girl Scouts of Greater Los Angeles, Los Angeles Public Library and the Los Angeles Police Department.

Inside the MPR were booths where people sold comics, artwork, movies and video games. In addition, a museum was showcased with props from shows and movies as well as pop culture like . Vendors and comic book writers interacted with visitors by sharing information about their passion for comics and cosplay.

“I started going to comic book shops and saw there were no women of color on the cover (of books,) so I (decided to) create Rayven Choi,” Shequeta Smith said about her inspiration to introduce more graphic novels written by women of color.

Vehicles were parked outside the MPR for the convention’s first annual Car Show, featuring models ranging from the 1940s to 2017. Vehicles included models from Ford, Buick, Datsun, Volkswagen, Dodge, Pontiac, Porsche and Fiat.  Knight Industries Two-Thousand (better known as KITT), a car from the 80’s television show “Knight Rider” was also on display.

“It’s great, like I’ve been to other comic cons before so doing something of this size and skill is kind of a new experience,” graphic novelist of “The Tempest” and “The Fire” Elaine Ho said.