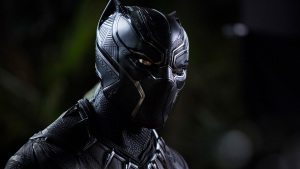 In the kingdom of Wakanda, it’s all about vibranium. From weapons to buildings and even to cars, everything is made of vibranium. T’Challa’s (Chadwick Boseman) Black Panther suit, which was created by his comedic younger sister Shuri (Letitia Wright,) is made of vibranium and offers all sorts of cool abilities like absorbing and releasing kinetic energy.

Michael B Jordan’s performance as the films main antagonist Erik Killmonger is groundbreaking and a big upgrade from his role as Johnny Storm in the poorly received “Fantastic Four.” Andy Serkis delivers an entertaining yet disappointingly short performance as Ulysses Klau and Martin Freeman lightened the mood in serious situations with his awkwardly funny moments as “broken white boy” Everett Ross. Director Ryan Coogler, who also directed “Creed,” certainly did a perfect job with every aspect of the film.

Although the all-women protective force of Wakanda may seem intimidating and serious, they are jokers on the inside, as proven by General Okoye (Danai Gurira.) The film truly highlights the strength and knowledge that women hold in society and its progression.

On its second week in theaters, the film has grossed more than $700 million, already exceeding its $200 million budget. The film has yet to be released in China and Japan so its numbers will continue to rise.

“Black Panther” offers a serious yet comedic tone and dramatic fight scenes that will guarantee to have you on the edge of your seat.