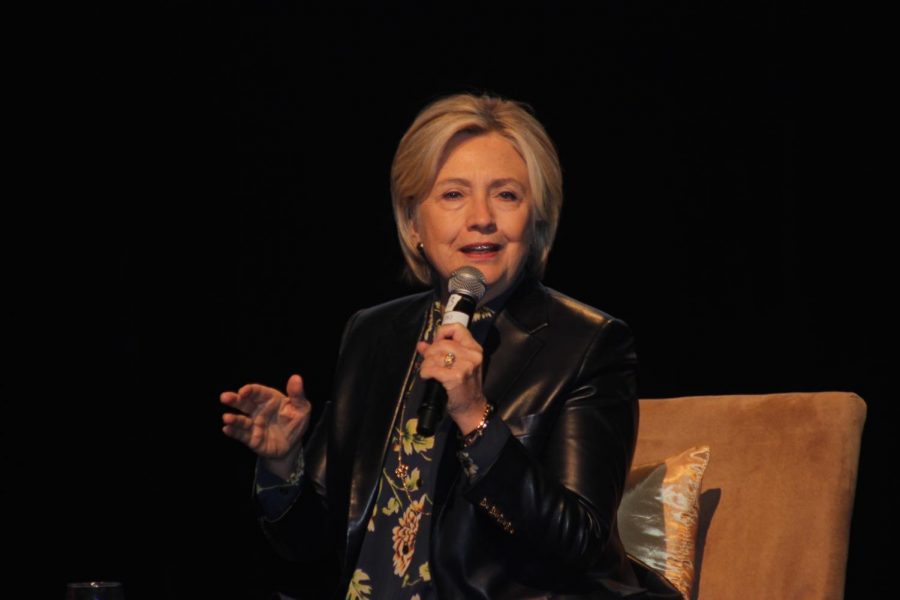 Former Secretary of State Hillary Rodham Clinton encourages girls to go to college and follow their dreams during the Girls Build LA Leadership Summit on Dec. 15 at the Los Angeles Convention Center.

The Girls Build Leadership Summit influences and empowers thousands of girls across the Los Angeles County to make a change in their community.

Veronica Melvin, President of the LA Promise Fund, gathered various intellectuals at the LA Convention Center on Dec.15, hoping to inspire girls. Former Secretary of State Hillary Clinton was the keynote speaker. She went on to say how powerful, valuable and deserving females are of every opportunity in the world.

“I believe strongly that every single young person, especially in this country, deserves all of the tools that are needed to build a healthy, educated [and] safe life,” Clinton said. “Everybody has challenges in life and what my mother taught me after all the difficulties in her life, is that everybody gets knocked down. What matters is whether you get back up and keep going.”

Three chosen winning teams were recognized for their great inventions and determination to make a difference within their communities. First place was taken by San Fernando High School’s DIY Girls Inven team, which created a solar powered tent that fits in a backpack in order to help the homeless. Second place was given to Compton Early College High School because of their change agent mission on personal care and wellness. They’re aiming to set up a youth advocacy group within their city. In third place was the Girls Build LA team from Palmdale Learning Plaza. They created a planteranium to inform girls that they too can take part in STEM and aerospace activities.

Fireside Chats were also held with panelists who changed the status quo by staying true to who they professionally and personally are. Women like founder of Mitú, Beatriz Acevedo, Olympian and designer, Ibtihaj Muhammad, and STEM diversity advocate, Dr. Knatokie Ford, participated. Their main goal was to teach girls to get out and not be afraid to stand out, as it’s the only way they’re able to get to the top of their game.

“I got a little more hope out of the entire experience and a little less solitary,” sophomore Marjina Haque said. “As you near college and you have to start deciding on career paths, it’s scary to think you may have all the potential and requirements necessary to be successful [yet] still be undermined because you’re a woman or because you’re of color. This convention showed me that the job market is definitely expanding and more girls are taking over.”

In between the chats, girls were treated to a sparkly performance by the LA City Municipal Dance Squad. To lighten the mood in the environment even further, they were also given the chance to participate in a guided meditation with co-founder of Headspace, Andy Puddicombe.

“The career you want to build, the change you want to make in your community; you’re going to have to work for it,” Obama said. “You’re going to have to fight for it. And if you find yourself struggling, you absolutely need to ask for help. I promise you that there are caring adults in your school and your community who want you to succeed. So seek them out, ask for their support and don’t forget to turn to your sisters as well.”