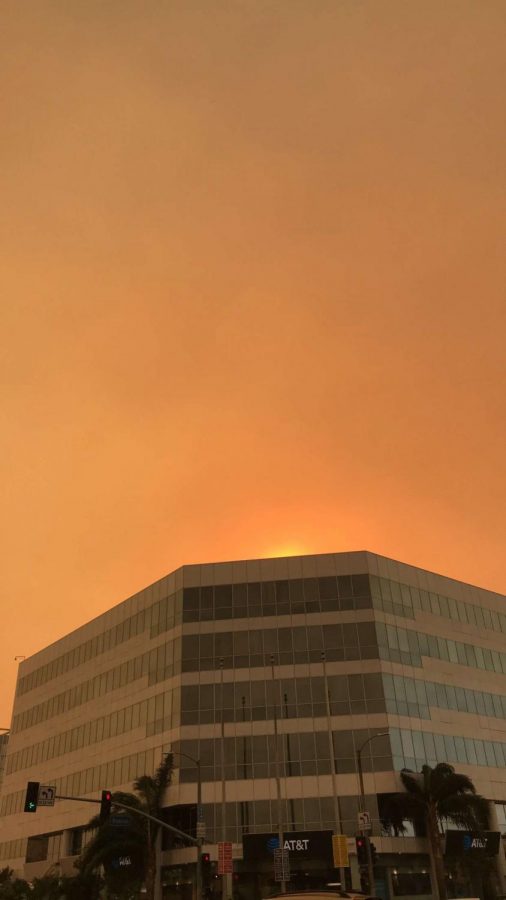 Powerful wind brought the smoke from surrounding wildfires to the valley, resulting in unhealthy and dangerous air quality. The sky at the intersection of Roscoe and Van Nuys boulevards is orange from wildfires in December 2017.

Due to the recent uprising of wildfires, the Los Angeles Unified School District officials announced late this afternoon to the decision to suspend school tomorrow and Friday within the entire San Fernando Valley.

This means more than 250 schools located in local districts Northeast, Northwest and District West will be closed.

The decision was made due to the unhealthy air quality coming from surrounding fires in Sylmar, the Sepulveda Pass and Ventura County. Although, they don’t affect Daniel Pearl Magnet High School directly, they are major problems in those larger areas. Students concerned about the smoky air wore face masks on Tuesday and Wednesday. Other students stayed home on Wednesday.

According to Principal Deb Smith, finals will not be affected by the sudden decision however it is unclear how the two days will be made up for.

This is not the first time LAUSD has had an unexpected closure of schools. Previously on Dec. 15, 2015, all district schools were closed due a bomb threat that had been made against school campuses.

Both Principal Smith and Superintendent of L.A Unified Local District Northwest Joseph Nacorda sent messages to families notifying them of the closure, via JupiterEd.

A full list of the schools closed for the next two days is available on the district website.