Poetry gets personal during Get Lit! assembly 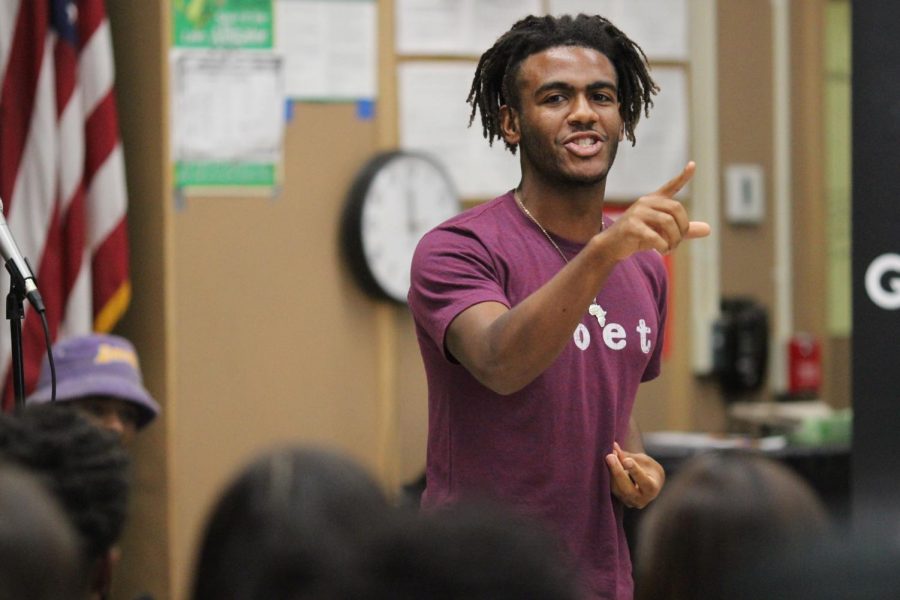 Get Lit! poet Cyrus Roberts shares a response poem to an excerpt from "The Iliad and the Odyssey."

Rushing and filing into the multipurpose room at break speed, students’ ears are greeted by Chance the Rapper’s song “No Problem.”

Over the loud music and excited murmurs, English teacher Ron Baer goes up to the mic and tries to quell all of the noise.

“The poets you are going to see, they are not professionals,” Baer said. “They are high school students just like you.”

The Get Lit: Words Ignite Players are young poets who are members of the non-profit organization that aims to promote literacy worldwide. Each year, they visit different high schools and perform their riveting and heart stopping poems in order to recruit new aspiring poets to their cause. On Nov. 30, host and advisor Paul Mabon brought new players to showcase their work and tell their stories.

“As always they were breathtaking and never failed to surprise me,” junior Emely Felix said. “I got chills. I can’t even put it to words.”

Poet Claire Oldham delivered a philosophical piece called “Girl Named Anything” that was just as fiery as her hair. Cyrus Roberts recited his introspective response poem titled “My Odyssey” in response to the classic “Odysseus’s Secret” by Stephen Dunn. Returning member Khamal Iwaunyanwu gave a theatrical rendition of Jill Scott’s love poem “Selfish.” Player Juliana Judge recited a verse from the Book of Proverbs before giving her crazy and witty performance of her response poem titled “I’ll Open Jars for You.”

“I thought it was really good,” freshman Miko Martinez said. “The performances all had themes of of social justice but also were humorous at the same time.”

After the Get Lit players finished their awe-inspiring pieces, Mabon left the stage open to any students or staff who wanted to display their talent and share their personal stories. Baer performed an original and tear jerking piece about his family titled “My Brother Martin.” Former Get Lit members such as Kamryne Blake, Felix and David Palacios also took to the stage to express their emotions and deliver their compelling verses.

As Baer recruits his new team of poets for auditions on Dec. 11, aspiring students now have a new source of inspiration and ideas to look to. The players left advice dealing with writing poetry such as being true to yourself, putting yourself out there and treating the open mic like therapy. All of the visiting Get Lit players have won awards or recognition for their poetry, with Iwaunyanwu being the highest scoring poet of 2016 at the Get Lit Classic Slam that takes place every year.