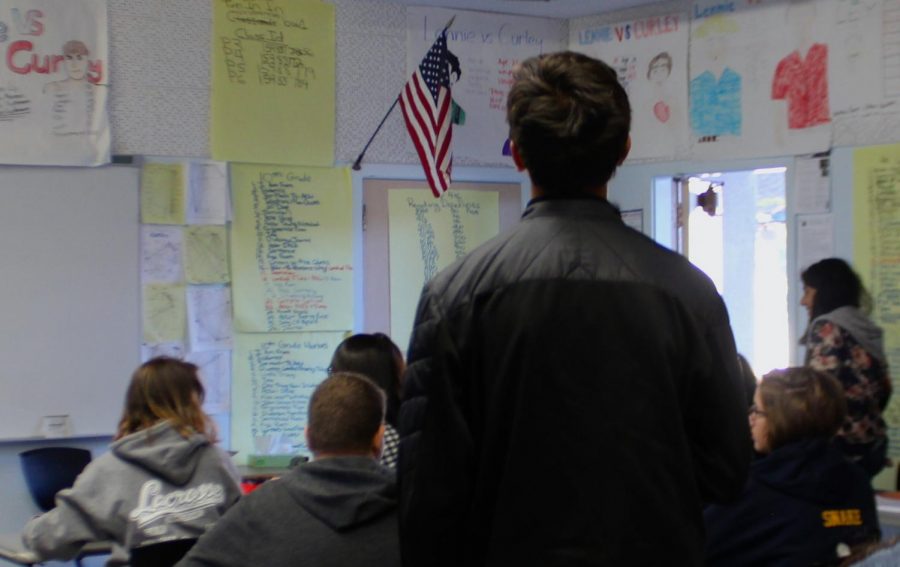 During the morning Pledge of Allegiance, many students students across di erent classrooms choose to not stand, leaving up to only two students per class standing alone.

Sophomore Bianca Lam understands the reason why some people are protesting during the singing of “The Star-Spangled Banner” at football events but she still believes it is disrespectful to kneel. She sees this ritual as a way to honor veterans, such as her uncle.

“The U.S. flag is symbolic of all of its history,” sophomore athlete Bianca Lam said. “Not necessarily the bad, but also the good.”

Since last year, football player Colin Kaepernick began kneeling during the national anthem to protest the ongoing racism in the country. According to the Sept. 24 article “Trump responds to: Standing with locked arms is good, kneeling is not acceptable” published by CNN, Kaepernick said “I’m not going to stand up to show pride in a flag for a country that oppresses black people and people of color.”

The protests among NFL athletes have spread to schools where students hold their own silent protest, protected by the First Amendment, during the morning “Pledge of Allegiance” by remaining in their seats.

“I sit during the pledge,” sophomore Marjina Haque said. “I don’t respect the face of America and the American government and their principles and the discrimination they face all Americans with.”

As the football season began this year, players from across the country have knelt, locked arms or stayed in locker rooms as the national anthem played. President Donald Trump, disgusted by this gesture. He continued to criticize the players by making nasty comments and poking fun mostly toward black athletes.

Trump also  went on a Twitter rampage and went on to attack the NFL players because they “disrespects our flag.” He is furious and wants all the NFL protesters to be fired.

As a response, professional athletes such as Devin McCourty, began to kneel throughout the following games. Later on in the day, Trump claimed that his comments didn’t involve race. He was mad because their actions caused “bad ratings” and showed disrespect to our country according to the Sept. 24 article “As Trump continues his attacks, NFL players protest by kneeling or locking arms” published by the Los Angeles Times.

“We hate that people are going to see it as that we don’t respect the military and the men and women that are way braver than us that go and put their life on the line every day for us. …” McCourty said. “But, we just wanted to send a message of unity and being together and not standing for the disrespect and different ways guys felt.”

Although NFL players play a big role in young people’s lives, some students still stick to their own beliefs. They practice their First Amendment rights by speaking their minds.

“I stand because I respect my country,” sophomore athlete Olivia Bullock said. “It shows me that people will really never be satisfied even when people are really trying to make this place better or when people sacrifice themselves to have us be free that’s never going to be good enough for them.”