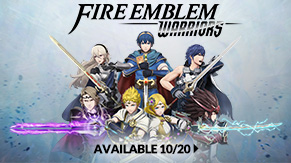 The game takes place in the kingdom of Aytolis, where twin prince and princess Rowan and Lianna face danger when the Gates of the Other World unexpectedly open and evil forces enter their realm. With the kingdom in trouble, the twins journey to different worlds to gather allies in order to save their kingdom.

Gameplay will revolve around attacking hordes of enemies with attack combos and critical hits. Four characters can be chosen for each map and the player can switch from character to character during gameplay.

The other three characters not being controlled will be set to AI (Artificial Intelligence). Characters will be able to grow bonds with each other, similar to the support system seen in previous games.

Class promotion, where characters can transform into stronger soldiers and learn new to use new weapons and skills, will also make a return.