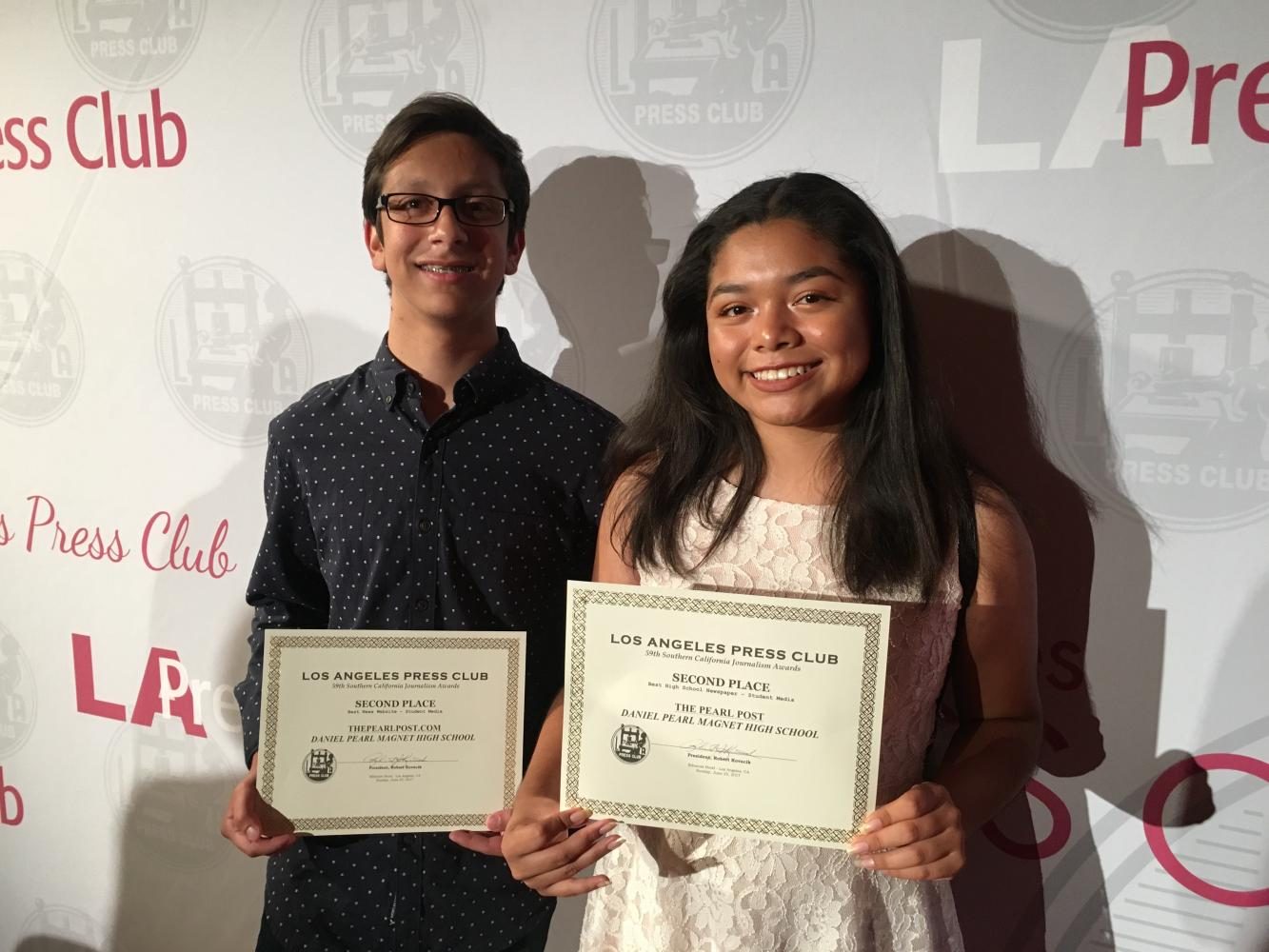 Editors Michael Chidbachian and Kirsten Cintigo after receiving second place for both the online and print publications at the 2017 SoCal L.A. Press Club Awards in June 2017.

At the start of the event, attendees were allowed to take photos on the red carpet and soon after, the silent auction full of jewelry and signed memorabilia was open. As the program began, dinner was served at the same time Kovacik gave his opening speech. In a matter of moments, the student category awards in which The Pearl Post was nominated in came up.

The newspaper placed second for the best High School Newspaper, coming in after The Accolade from Sunny Hills High School. The accompanying website, which was up against four universities, also won second place after the University of California, Los Angeles’ Daily Bruin. This has been the sixth year in a row in which The Pearl Post has been a finalist in the Los Angeles Press Club awards.

President of the National Press Club Jeff Ballou spoke about the importance of journalism, emphasizing the significant role it plays in everybody’s lives. After another set of awards were handed, Judea Pearl introduced recipient of the Daniel Pearl Award, Daniel Berehulak. The photojournalist recently covered the massive drug war in the Philippines, earning him the award that stands for courage and integrity in the world of journalism.

Judea Pearl said that his son, Daniel Pearl, risked his life reporting to expose the truth and that Berehulak has also done just that.

Jorge Jarrín later introduced his father, Jaime Jarrín, who was given the Bill Rosendahl Public Service Award for spending decades as a broadcaster for the Los Angeles Dodgers. Unlike many other sportscasters, Jarrín covered thousands of games for nearly six decades to the Spanish-speaking audience, making them feel welcomed into an event that is essential to American culture.

The Press Club has also brought in a new award which was handed out for the first time this year. The Truthteller award was given to rapper Shawn “Jay Z” Carter and producer Harvey Weinstein on their documentary covering the falsely imprisoned African-American man, Kalief Browder. Unfortunately, Carter and Weinstein were unable to attend the gala. Browder’s brother Akeem, however, accepted the award for Carter and Weinstein. Akeem Browder also talked about running for Mayor of New York City in hopes of changing the criminal system, mainly because Kalief Browder wasn’t sent to juvenile prison despite the fact that he was only 16 years old.

O’Brien then gave a small speech about CNN anchor and Chief Washington Correspondent Jake Tapper. This led to Tapper accepting the award for his impact on the media. He has reported on many events, most prominently the 2016 Presidential Election.

The final award was given out to NBC and MSNBC reporter Andrea Mitchell for her lifetime achievements in journalism. Mitchell was chosen for the Joseph M. Quinn award because of her many journalistic achievements. She has reported on countless events such as the Watergate scandal and has made many contributions with her reporting.

“Andrea has the ability to shake the world,” said Katy Tur, an NBC News correspondent and friend of Mitchell. “She will always have your back.”

The hashtag #nottheenemy was used on social media to publicize the event. The tag is based on the recent bash on many media outlets in which, mainly Republicans and conservative-leaning news outlets, believe that the mainstream media is creating problems with false facts and reporting.