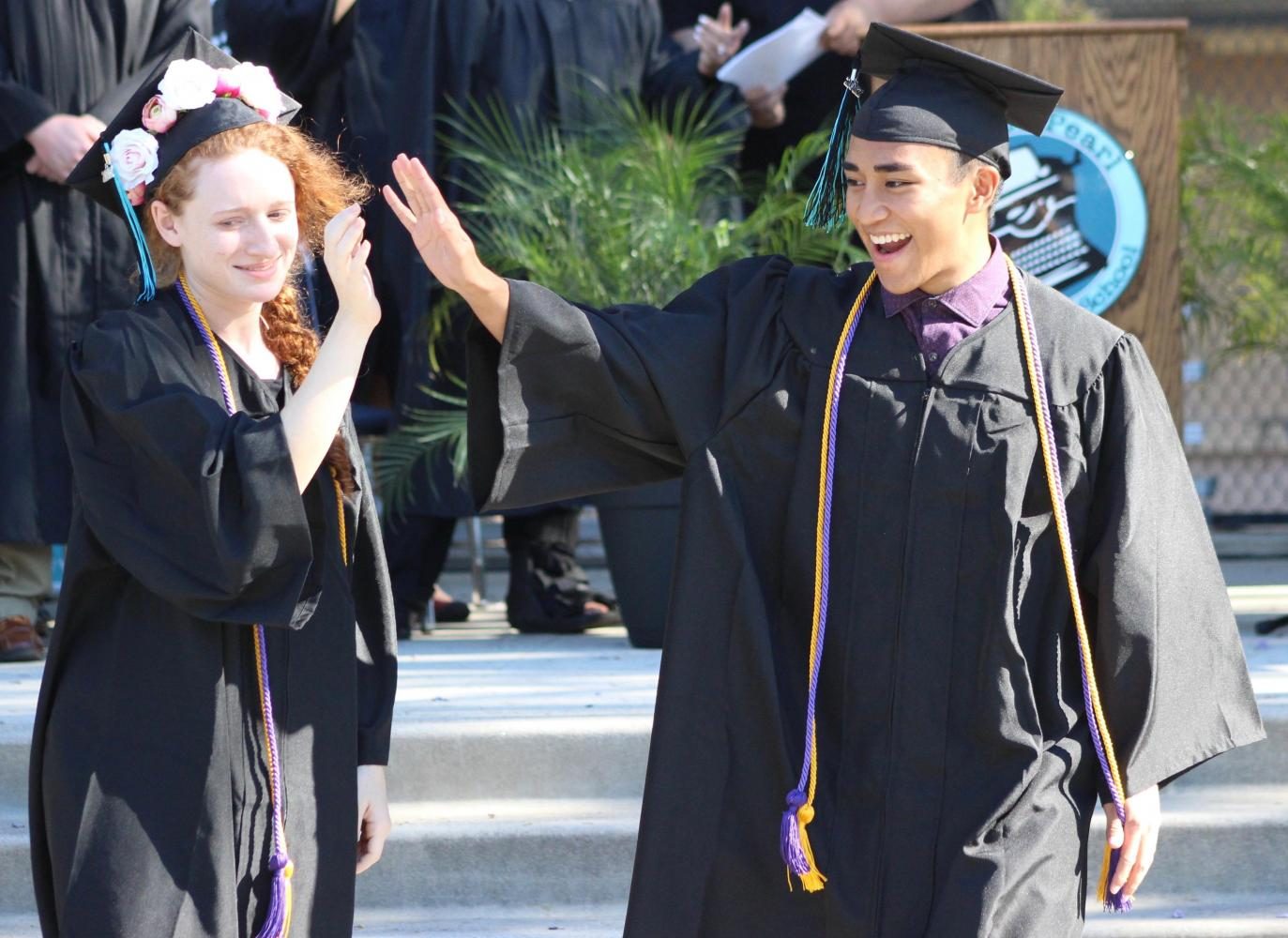 Raquel Dubin and Chester Castro congratulate each other after walking across the stage during the commencement ceremony.

With trees swaying and the sun beaming on family and friends at Mulholland Middle School’s quad, the Daniel Pearl Magnet High School graduation of the class of 2017 commenced on June 9.

As graduates took their seats, the ceremony began with the presentation of the country’s flag, presented by the color guard of Mulholland. Graduates Lissa Favela, Erica Mallari and Ana Monterroza performed the national anthem, “The Star Spangled Banner” once the color guard had finished its presentation. Along with the national anthem, graduates and students performed other songs throughout the ceremony, such as “Rise” and “We are the champions.”

Senior Class President Andrea Escamilla delivered the senior address and discussed the many obstacles the Class of 2017 had to overcome. During her speech, Escamilla recognized office assistant Lupe Osorio and campus aid Madgeolyn Wooten for the love they’ve given the class throughout the years.

“On behalf of the Class of 2017, a huge thank you to Ms. Lupe and Ms. Madge for treating us more like family than students,” Escamilla said.

Class Valedictorian Rebekah Spector (click here to see video) delivered a speech on how people need to take matters into their own hands and to not wait for someone else to do it for them. Spector also discussed the challenges she faced while being editor-in-chief of The Pearl Post, such as having to decipher the ongoing problems of fake news. She expressed her opinions on journalism and how valuable it is in the world.

“We must use our skills from Journalism 1 to give a voice to the voiceless,” Spector said.

This year’s commencement speaker  (click here to see video) was Pulitzer Prize winning journalist and CEO of Define American Jose Antonio Vargas. Vargas spoke of how his mother sent him put him on a plane in his native Philippines to the United States as a child. Being in the United States with no legal papers made Vargas an undocumented immigrant living with his grandparents. In high school, one of Vargas’ teachers recommended that he join journalism due to his many questions. There, Vargas realized that writing was not just a form of expression but a form of rebellion.

“I’m the product of the generosity of my high school teachers,” Vargas said. “Mrs. Dewar, my English teacher who also happened to be the journalism advisor, said I ask too many annoying questions and should do this thing called journalism.”

After the speech, graduate Katie Lashley, junior David Palacios and sophomore Emely Felix recited their poem, “A Hero’s Story” that was about the school’s namesake, journalist Daniel Pearl. Soon after, Dr. Judea Pearl, father of Daniel Pearl, announced the student who was selected to receive the Daniel Pearl Scholarship, which was Spector.

Principal Deb Smith and Counselor Martina Torres then began to present the Class of 2017, which was the first to have 100 percent graduation rate, accompanied by many air horns and confetti bombs. Smith then started the confirmation of the class, as they start a new chapter in their lives.