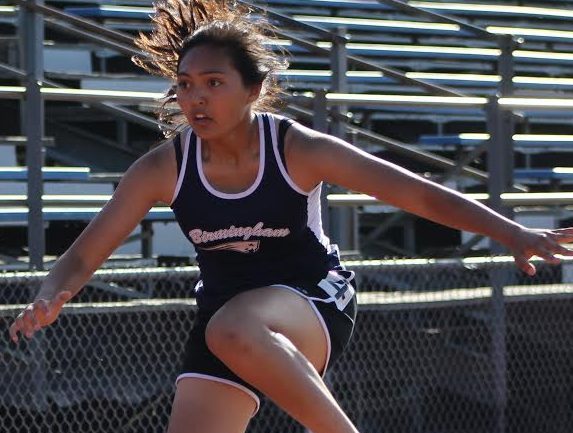 Freshman Keona Paniagua jumping over a hurdle in track.

With the school year coming closer to an end so does the track season.

The Birmingham Community Charter High School track team season has come to a bittersweet ending for players. From the dusty strides in the beginning of the season due to starting with new players, Keona Paniagua and Chad Hayes, to the swiftly sweeping movements of senior Juliette Tafoya.

“Since it was my last year, I really put all my effort into my running,” Tafoya said.

The track team season last year ended with a steady score and left a smooth start to the beginning of the new season. Players trained hard with practice everyday from 2:30 to 4:30 and managed to end their current season with an overall of 1-0, according to MaxPreps online score report.

“Overall I love competing, I love winning and the team was really solid this year,” Paniagua said.

The team hopes to improve by working on their core more by upper body training in which will help beat the competition next season.

Players such as Hayes recommend that the runners create a drive while on the track.

This is not the end for runner Paniagua as she will continue to be apart of the team even after joining other multiple sports.

“I do plan on doing track the next four years… It [was] a lot of intense running,” Paniagua said.