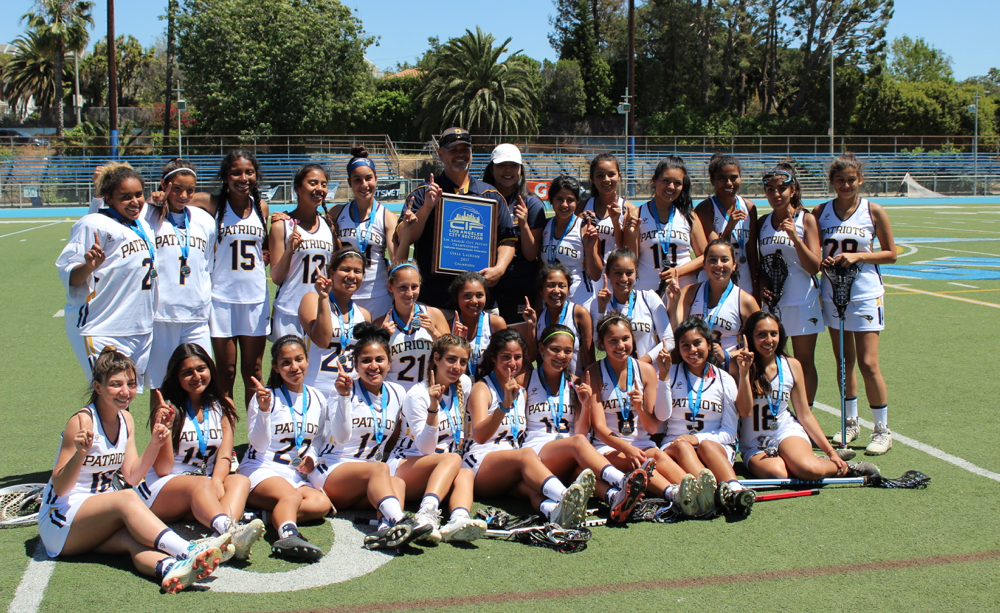 The girls lacrosse team pose with its plaque after winning the Championship game against Palisades High School.

After 14 wins and six losses in the girls varsity lacrosse season, the team ended the season with its fourth consecutive L.A. City Sections Championship win on April 29.

On the long anxious bus ride to Palisades Charter High School for the championship game, sophomore junior varsity player Alexis Lucy Ishkhanian belts out “Now or Never” from “High School Musical 3” with all her teammates. The energy intensified by the yells, unaware that there would be “16 minutes” on the clock as the game tied. When they won 6-5, the rush of adrenaline settled.

Over nine months of training, five days a week from 2:30-5:30, prepared the team for their well deserved win on April 29. Winning second place in their LAX Bash Tournament and advancing to the Southern Sections doesn’t come easy.

“Some people believe just because we won four years in a row that it comes easy to us,” varsity player Andrea Escamilla said. “It’s a hard earned win every time.”

Out of the four Daniel Pearl Magnet High School players on the team, three are seniors headed for college. Goalie Tahra Hunter, attacker April Serrano and attacker Andrea Escamilla will not play in college. Leaving such a high title in their name puts pressure on Ishkhanian.

“I feel that I’m obliged to do my best,” Ishkhanian said. “To be like them and better. I saw that the team was one. You didn’t have multiple players. You had one strong bond.”