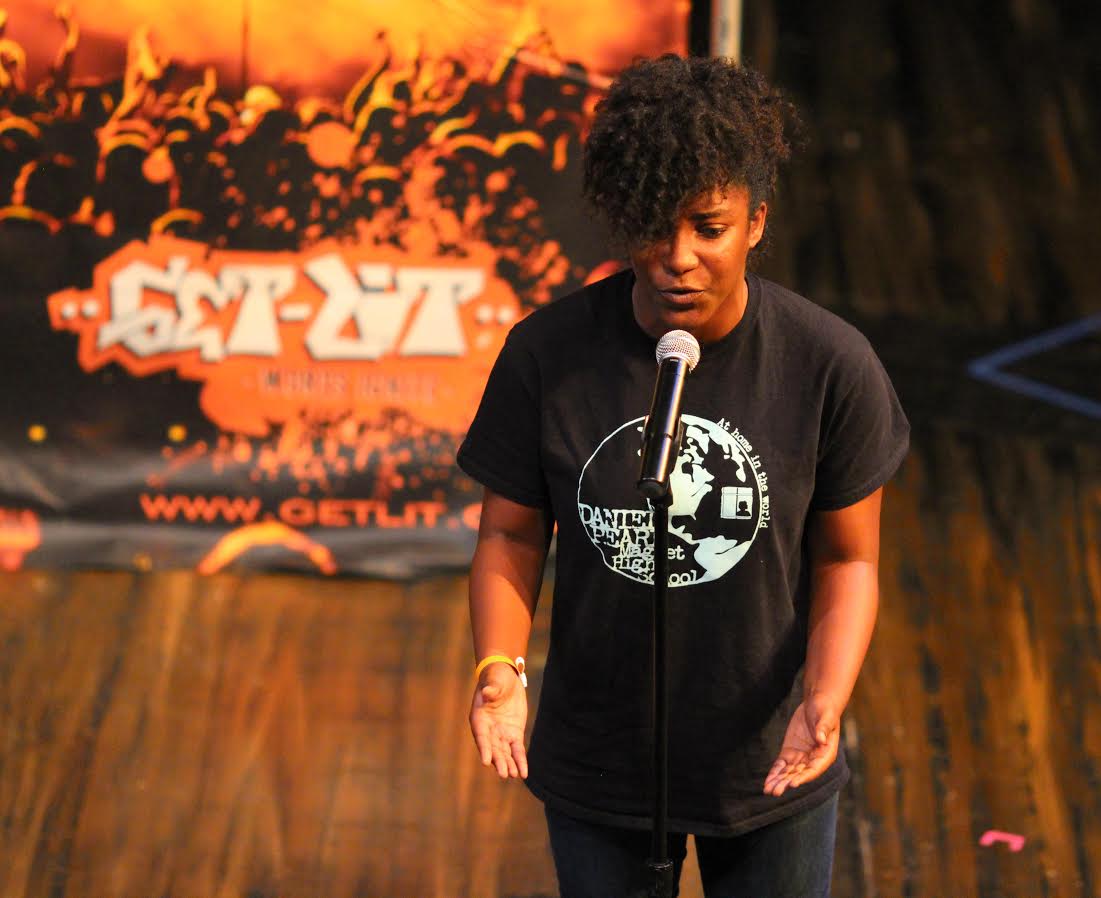 Senior Katarina Lashley performs the piece "Nobody but you" by Charles Bukowski in her last Poetry Competition.

The Get Lit team huddled up in front of the Los Angeles Theatre on April 20 preparing for everyone’s second year competing in the Get Lit Classic Slam.

For senior Katarina Lashley, it would be her last time competing in the sixth annual Classic Slam. The Daniel Pearl Magnet High School (DPMHS) Get Lit team started off the quarterfinals

with Lashley’s classic poem, “Nobody But You” by Charles Bukowski. Lashley’s response poem, titled “Saving My Sanity” was a strong, emotional piece about the struggles she faces with her mother.

“I feel very proud that we made it so far in the competition, and I hope next year’s team will continue to win,” senior Katarina Lashley said.

Get Lit coach and English teacher Ron Baer anticipated a male addition to the team for this year’s competition and junior David Palacios was just who he was looking for. After coming in second place in the quarterfinals and advancing to the semifinals, Palacios planned on performing his classic poem “Bilingual/Bilingue” by Rhina P. Espaillat in the second round.

“I felt nervous as it was my first time competing, but I knew with all the practice, we would make it to the second round,” Palacios said.

The DPMHS Get Lit team placed fourth in the semifinals, not advancing to the finals, but have high hopes for next year.

“I felt elated, thinking finally after three years we made it,” Baer said. “When the host told me before he announced the winners that we won I grabbed him so hard and said, ‘Get outta here!’”

Get Lit is a non-profit organization that works with over 100 schools throughout Southern California. The program curriculum promotes literacy in teens and “satisfies the elective requirement for University of California’s subject requirements for college admission,”according to an article by Executive Service Corps Southern California in 2015.

Many friends and peers came along to cheer on the poets as they performed their classic and response poems in front of different schools such as Los Angeles Center for Enriched Studies (LACES), Venice High School and Inglewood High School.

“My hopes are we can make it to finals next year,” Palacios said. “Also to see new poets join the team.”