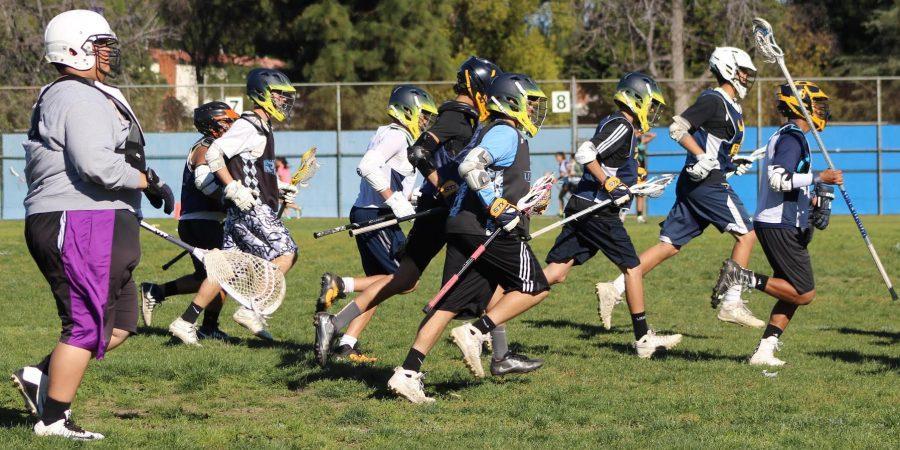 Junior Dean Khazanov runs with the lacrosse team across the field during practice at Birmingham Community Charter High School.

After months of drills and practice plays, the varsity boys lacrosse team starts the season with a 2-1 lead, hoping to make it a few games into playoffs.

“We’re looking into get back to the city championships like two years ago and just increase the player’s skills more,” varsity coach Chris Iorio said.

The major motivation of getting farther in play-offs than last year comes from the team’s senior players. The coaches and players vow to make this season special for them.

“We want to go as far as we possibly can,” junior Dean Khazanov, varsity, said. “Our goal is to give the seniors a final hoorah.”

The team has worked on communication and practiced hard to maintain a winning demeanor. Even junior varsity (JV) started the season with learning about teamwork and improving their skills.

“It’s been getting better because people couldn’t pass or catch before, but now they can,” junior Matthew Munoz, JV, said.

Because most of the team has played other sports, such as football, the team doesn’t focus on conditioning. The coaches make sure to practice the team with drills to advance the team’s strategies. They work with the boys on plays and the team as a whole rather than running.

“We’ve been practicing almost every day this semester, getting sticks in their hands and have them do team bonding outside of school,” Iorio said.

The boys lacrosse team still has a ways to go, the season ending in early April and the players, especially those on varsity, plan to make the most of it while it lasts. The feeling of satisfaction seemed mutual between players regarding the group’s capabilities, making the season’s start memorable and valuable to the upcoming season’s tone.