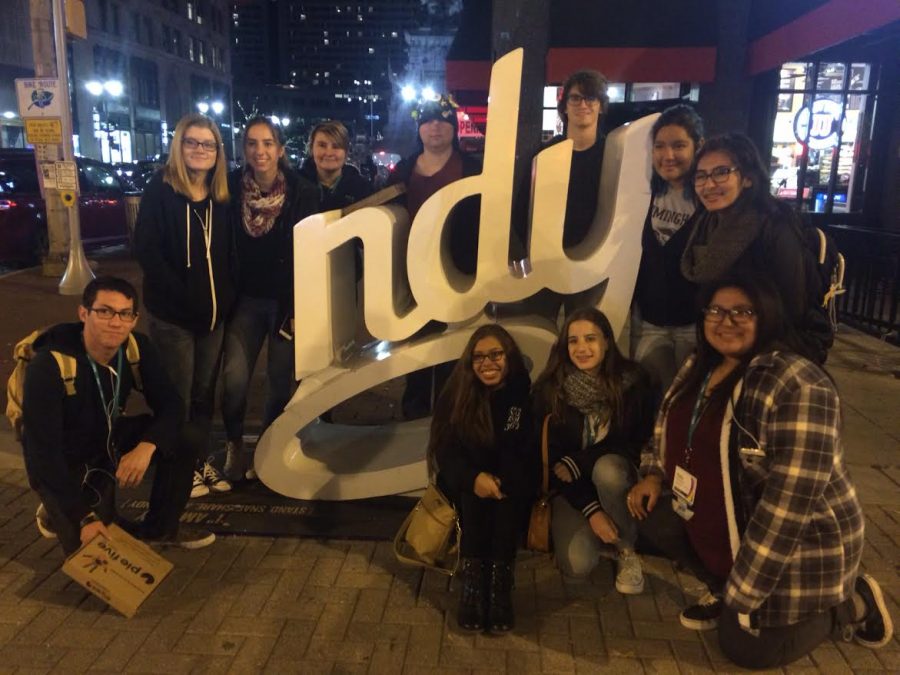 Students pose next to an Indy statue on Saturday night.

Students from Daniel Pearl Magnet High School’s (DPMHS) newspaper, yearbook and broadcasting staff went to the convention on Nov. 9-13, accompanied by The Pearl Post’s adviser Adriana Chavira and Pearl Net News’s adviser Mark Middlebrook. The convention drew just over 3,800 students and teachers from across the country.

Arriving in Indianapolis opened up a door to the heart of the city. The first day was spent walking along the canal outside the J.W. Marriott Hotel where the convention was held and wandering the city, from canal-side Italian restaurants to grocery stores.

Following a long night, Thursday held hands-on workshops for everyone starting at 8 in the morning. Students attended workshops for design, broadcast and writing. Each workshop provided the students with tips on how to become better journalists in one of the most competitive businesses in the world.

“The workshops were extremely informative and I’m glad I was able to have such an amazing opportunity,” senior Emily Rodriguez said. “Hopefully this knowledge can help out our broadcast network so we can win awards in the future.”

The keynote speakers, broadcast journalists Kevin Rader and Steve Rhodes, presented pieces of their work about human interest and gave the advice to cover stories differently than a traditional news story. They discussed how the purpose of their work was to show the most genuine side of people and display their happiness.

On Friday, some students attended a Break With a Pro session, which allowed them to talk to a professional about the journalistic world and what a career in it entailed. While some students were with a professional, others were at sessions which reviewed the basics of Associated Press style writing and how to tell a story in six words.

“The six-word story session was really informative,” senior Ruby Rodriguez said. “It really taught me how to tell a story in my pictures and words.”

Later that day, the write-offs were in full swing. Students went head to head in competition against other participants from across the country.

“The rally was inspiring to see and I wanted to be a part of it, but it wasn’t appropriate for the time,” Ruby Rodriguez said. “I wish the police handled it a different way. It was a poor way to shut it down.”

Despite the rally, the convention proved a success in all senses. Unable to stay for the award ceremony, DPMHS’s students left Sunday morning.

“I really liked the convention because it was really helpful and I learned so many things to bring back to the school,” Michelle Kaganovsky said. “It was a really fun experience.”