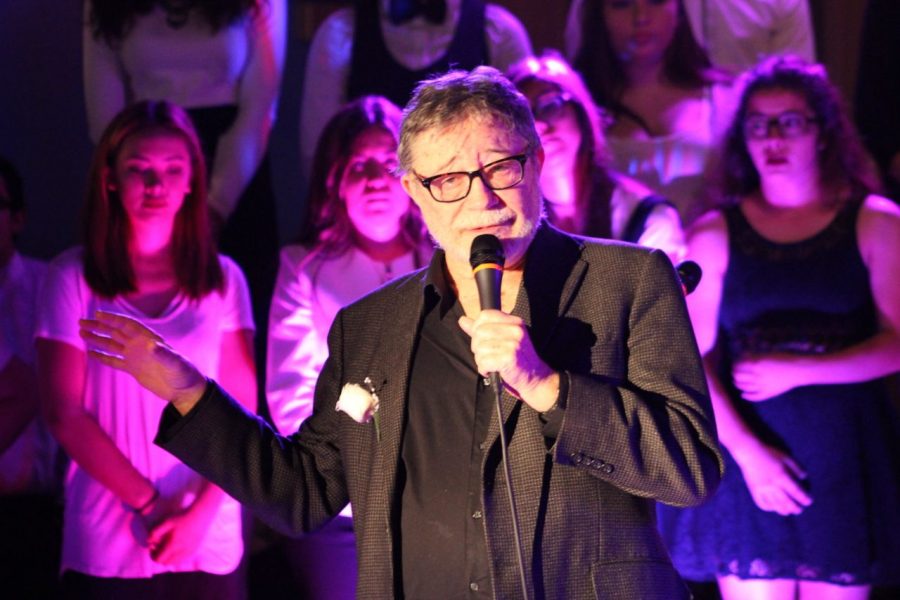 Dr. Judea Pearl gives a emotional speech to the audience for the seventh time.

The bright, purple lights of the stage illuminated the otherwise dark MPR. The walls were decorated with paintings of colorful peace signs. The audience chattered quietly as they waited for the show to begin.

On Oct. 28, Daniel Pearl Magnet High School students performed in the 7th annual Daniel Pearl World Music Day (DPWMD) held in the Multi-Purpose Room (MPR). DPWMD is a series of concerts held around the world in October to honor the life and death of Wall Street journalist Daniel Pearl.

Along with Dr. Judea and Mrs. Ruth Pearl, the MPR was filled with guests including members of the Lake Balboa Neighborhood council, Los Angeles Unified School District officials and third graders from Valley Alternative Magnet School.

“I liked when they sang all the songs that I know and I liked celebrating Daniel Pearl because he was a great guy,” third grader Victoria Mejia said.

Dr. Pearl, along with his wife Mrs. Pearl, attend every DPWMD as the school honors not only the namesake of our school, but what the school stands for: bravery, determination and acceptance.

“Daniel Pearl World Music Day is all about remembering someone,” senior soloist Ruby Rodriguez said. “We sent out a message of peace and harmony because that is what we need right now.”

“Daniel was very unorganized except for his music collection which he prided himself with,” Mrs. Pearl said.

The Daniel Pearl Foundation, created by his parents soon after his death in 2002, sponsors the world-wide musical event. During the first year of Daniel Pearl World Music Days, there were 118 concerts held throughout the world. This year, there have been over 15,000 shows held in all parts of the globe to pay tribute to the work of the slain journalist.

Senior Katie Lashley started off the show by performing her original poem, “Today Until Tomorrow.” Poetry is a new addition to the school’s DPWMD, letting the spoken word and music work in harmony.

Senior Fairy Chotset opened Leonard Cohen’s song, “Hallelujah,” with a violin solo, the choir later joining in with the melody. Throughout the song, Wes Hambright conducted the choir.

Throughout the show, there was a variety of captivating poetry. The Pearls commented that “Birth of a  Monster,” performed by sophomore Emely Felix and seniors Katie Lashley and Juliette Tafoya, was one of their favorite performances.

“It was very powerful and always ready with a punchline,” Mrs. Pearl said.

Another memorable poem was given by junior Mirabelle Chernick. The poem, “Peace Seekers,” spoke about putting an end to war. Her poem directly referenced Mr. Pearl, giving the performance a personal touch.

“I knew that nothing in the show at that point talked about Daniel Pearl and all that the family stands for,” Chernick said.

For the finale, an explosion of confetti covered the room as the choir sang “Give Peace a Chance” by John Lennon. With the crowd on their feet and moving along with the beat, Dr. Pearl wiped away a tear.

“Music is not a performance. It is a statement and you made a statement here for what Daniel Pearl stood for,” Dr. Pearl said. “It’s very heartwarming for us to see your school continue that message.”