Kaepernick shouldn’t be criticized for exercising freedom of speech 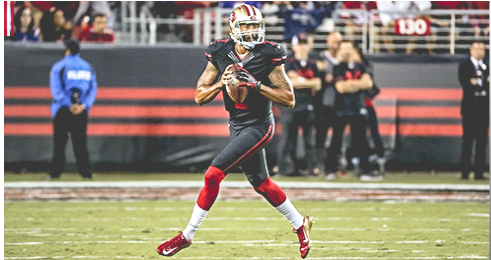 After San Francisco 49er’s quarterback Colin Kaepernick’s refused to stand during the national anthem on Sept. 18 during a Carolina Panthers game, he received an abundance of positive and negative criticism.

“I am not going to stand up to show pride in a flag for a country that oppresses black people and people of color,” Kaepernick said in an interview with NFL reporter Steve Wyche.

Kaepernick is an African American 28 year old born and then adopted in Milwaukee, Wisconsin, to Rick and Teresa Kaepernick. He started playing in the National Football League (NFL) in 2014 as a quarterback for the 49er’s.

Though it is argued that Kaepernick’s act of protest was to shame the flag and those who have died for it, Kaepernick urges that the reason he is not standing because, as stated in his quote above, he rather not stand for a country that has a bias to the black concentration of America. He also stated that he was standing, not in a literal sense, for the nationwide movement called Black Lives Matter.

According a Reuters poll, most Americans do not agree with Kaepernick’s act and found it unpatriotic but still believe he has the right to protest. By analyzing the poll, it states that almost half of Americans believe that Kaepernick can protest, but he cannot ‘disgrace’ the flag while doing it.

What those half understand is that it is his right to protest whenever he wants and wherever he wants, it is within his rights of freedom of speech. To my understanding, if Kaepernick were to protest for something other than police brutality toward blacks, there would be no problem. If he were to kneel for those who have died in war there wouldn’t be an issue, but because he kneeled for a very unpopular subject, he has received negative comments.

Viewers should also consider that a football stadium isn’t just a place to play one of America’s favorite pass time but it also is a gigantic platform where people like Kaepernick know that the entire nation is watching. For someone who is passionate about how black’s of America are treated and also has the access to such a huge platform, it’s almost idiotic to not use it.

In recent news, refusing to stand during the national anthem not only has spread across the world of professional sports such as U.S girls soccer player Megan Rapinoe and NFL player Eric Reid, but it has also spread to high school sports as well. In one case in Brunswick, OH, a football player by the name Rodney Axon kneeled during one of his games and he now unfortunately is receiving death threats from his own community.

But despite the constant backlash against the act, Kaepernick earned his place among the front cover of Time magazine clad in his 49er’s jersey and kneeling. This means that even though there might be many who disagree with the act of protest for racial equality, it is recognized that the act is much bigger than them. The act of kneeling and protesting for the equality blacks is bigger and more important than the backlash that those have taken.