Journalists discuss coverage controversy at the View On America event 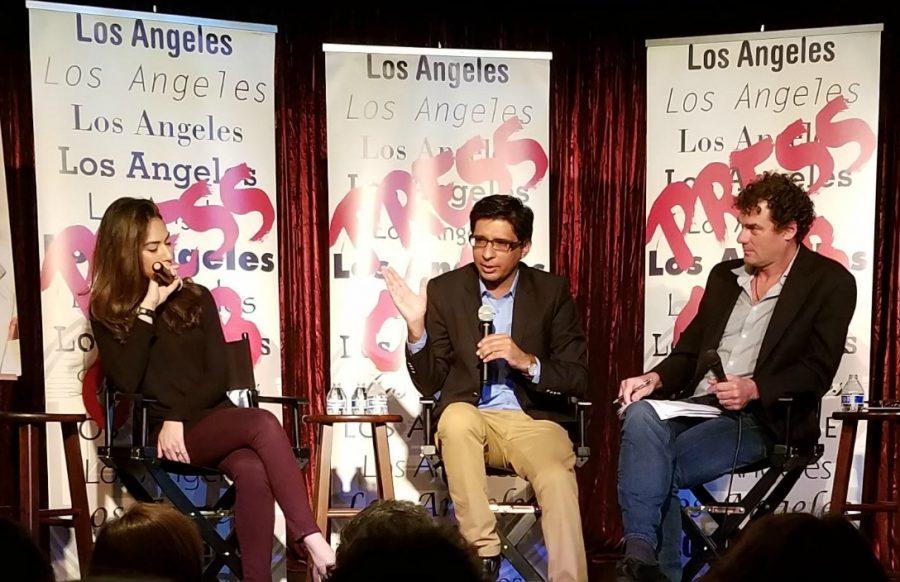 (Left to Right) Journalists Amal Khan, Aoun Sabbas Sahi and Rob Eshman sit upon a stage at the Views On America event discussing coverage in Pakistan on Aug. 11.

Journalist from around the world waited eagerly for the esteemed set of journalist to arrive to the Steve Allen Theatre in Hollywood on Aug. 11.

In the overbooked theater, two fellows of the Daniel Pearl Foundation, Los Angeles Times journalist Amal Khan and Times of London journalist Aoun Sabbas Sahi, discussed the challenges and virtues of being a journalist in Pakistan. They also answered questions from host TRIBE Media journalist Rob Eshman about times of prejudice in their careers. The event was held in the Los Angeles Press Club’s theater.

“We are living in a world with so much information and so little perception,” Sahi said in response to the claims that Pakistan is completely undeveloped.

Kahn and Sahi went back and forth describing their personal experiences of misconception not only within American views of Pakistan, but also Pakistani views of America. Sahi going as far as saying that when Pakistanis find out he is a journalist, they immediately assume that he must be a member of the CIA. Khan finds this ironic considering the unknown and excessive involvement of the Pakistani military.

“I mean, the military makes cornflakes in Pakistan,” Khan said.

The conversation occasionally addressed the elephant in the country, the republican presidential candidate Donald Trump. While the conversation discussed Trump from different angles, the comments were never positive. Khan going as far as comparing his tactics to those of extremists in terms of rallying support.

“The more extreme you are, the louder your voice is,” Khan said.