New era of teenagers, a new definition of racism 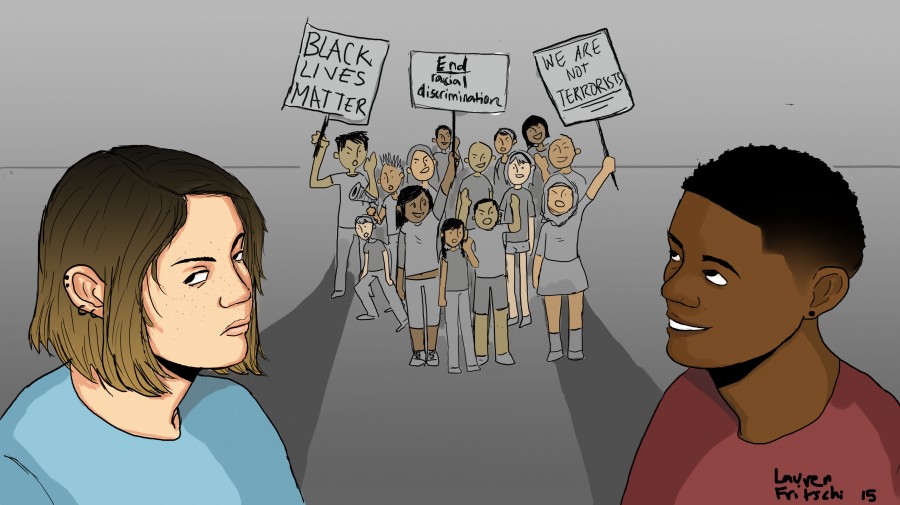 Race is an issue that seems to never go away but students of DPMHS face it every day. Some have different experiences than others. Students of every color learn to tolerate one another, regardless of race.

Quasar Nasir has taken offense to the recent backlash on the Arabic race because of the mass shooting in San Bernardino where 14 people were killed.

Fourteen people lost their lives on Dec. 2 at the Inland Regional Center in San Bernardino. The suspects were two people of Arabic descent. According to a Washington Post article, people in San Bernardino are blaming the entire Arabic race for what happened.

Race is still an issue in America. It can be in the form of protests over police brutality, racial prejudice, or stereotypes of entire races because of certain people. Six out of 10 Americans believe that actions still need to be taken to have equality between blacks and white people, according to a Pew Research Center study released in January on the five facts about race in America.

Racial problems are not just problematic in society, but also in schools. Last year, the Ferguson, Missouri, protests about justice for Michael Brown, a young black man who was shot and killed by police, sparked smaller actions around America. Students at Daniel Pearl Magnet High School taped posters of Brown on school lockers with the slogan “Hands up, Don’t Shoot.”

Some movements have also been created due to these events. Black Lives Matter was created as a call to action against anti-black racism in America. After recent police brutality cases, Black Lives Matter members have protested in streets and even on a freeway to prove their point.

“Race is important in this world when it should not be,” senior Taylor Murray said. “I have felt discrimination because of my skin color. Race is a topic nobody wants to talk about because they don’t want to let out their personal opinions. People ignore it and say it is not a problem when it is a much deeper issue.”

Murray grew up black in California and did not feel much discrimination in such a diverse community. However, when she traveled to other places in America, she felt the racial tension between people who live in primarily white communities.

Other students of color also say they see or experience racism or discrimination based on race.

“Racism still exists but it is not as bad as it used to be,” senior Juan Argote said. “It is a problem that people do not want to get over. It is hard to be racially blind.”

Karen Fleshman, an Antiracism Activist from the Huffington Post, published an article in July 2015 giving advice to white people to improve race relations. The immediate responses from white people were overwhelmingly negative while the responses from people of color were more positive.

“Americans are not at all on the same page when it comes to race, and from what I can observe, at a time when it is crucial we come together, we are drifting even further apart,” Fleshman wrote in her blog.

According to a Gallup poll taken in August 2015, race relations were not a problem when African-American President Barack Obama was sworn into office in 2008. However, that euphoria only masked deeper problems.

Race relations have recently declined and are currently an issue with the recent police brutalities  that are directed at entire races. Different races also view the same issue differently according to the Gallup poll taken last year. Minority groups view race relations as more of a problem than white people.

“In a perfect world,” said Hussam Ayloush, director of the Los Angeles chapter of the Council on American-Islamic Relations in a Los Angeles Times article, “no community would ever have to comment on or condemn an act just because the perpetrator looks or sounds like or shares a skin color or faith with the rest of the community. That’s not the world we live in today.”