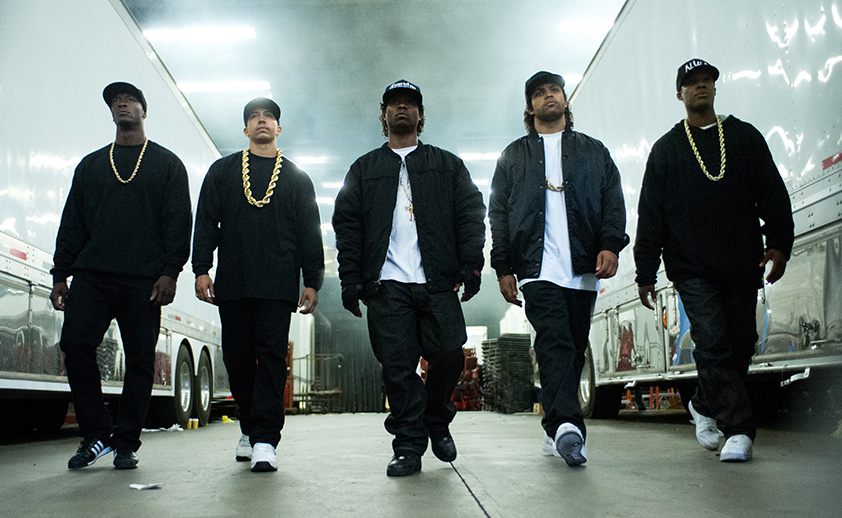 “Straight Outta Compton,” the biopic about hip hop’s most notorious group, N.W.A had a great opening weekend for a music biopic.

The film garnered a well-deserved $60.2 million at the box office on its opening weekend with one of the most diverse audiences this year. For director F. Gary Gray, this is is also the biggest domestic opening weekend ever for a black filmmaker. Gray, who launched his directing career with Ice Cube’s cult hit “Friday”, has directed successful films, such as 2003’s “The Italian Job” and his last directed film 2009’s thriller “Law Abiding Citizen.”

While watching this entertaining film, the audience really gets a sense and can sympathize with what the characters are going through as they are constantly being

profiled as “gangbangers” by the police, both black and white, and are forced to lie on the sidewalk simply because of their race. The harassment and discrimination by the cops inspired the group’s major label album debut for which the film is named after, “Straight Outta Compton.”

The film includes snippets of major events that took place in Los Angeles during that time, including the Rodney King beating and following the Los Angeles riots. The film also featured some exciting appearances by major hip hop artists such as Snoop Dogg and Tupac Shakur, both played by actors. As you watch the group write and perform the song “F-k tha Police,” about police brutality and street life, is when the film really starts to sink in and resonate with the problem in today’s society with racial profiling.

It’s scenes like this in the film where it sets the whole film off into the success, violence, and emotional turbulences that the group goes through together and individually. As the careers of both Ice Cube and Dr. Dre take off successfully, Eazy-E’s career and personal life deteriorate. MC Ren and DJ Yella’s personal life don’t have as much of a presence.

Although the film is overall entertaining, it definitely doesn’t hold back to show that rappers were speaking the raw truth about this country’s men in power but also let fame, ego and money get the best of them. An example would be the objectification of women more as luxurious items to demonstrate the level of success that the young men had been gaining.

Also, tensions start to escalate within the group as they let the business side of their art separate the group. There were still some characters that had left me wondering what happened to them and a few scenes that didn’t really seem to have any purpose.

An example would be the manager, Jerry Heller (Paul Giamatti). What happened to him after Eazy-E fired him? After Dr. Dre leaves Death Row Records, why did they include this very intense car chase scene between the doctor and the police that he eventually gets arrested? Afterward, he is seen back at his mansion lounging around with no mention of the previous event.

Overall, the film captured the reality of what these men had gone through, the relevance and importance of their music until now. Though, their actions at times seemed to be lacking taste and aggressive, watching the scenes where there were cops involved and the FBI basically were threatening and censored the group for a while from performing “F-k the Police.”

It was like a foretelling of the way black people were treated in major cities and would continue to be mistreated to this day. The movie has you replaying the recent events that have taken place in Baltimore, Ferguson and Charleston. In those two hours it has you, at times, thinking that you’re watching the news and forgetting that you’re just watching a film that’s a remake of events that took place over 20 years ago.