App of the month: “Mr. Jump” leaps to phones 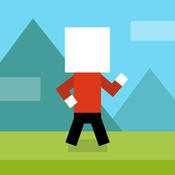 Jumping through obstacles is a way of life. The game “Mr. Jump” is here to entertain you through life’s obstacles.

Created by 1Button SARL, “Mr. Jump” was released on March 24 and has been entertaining students since.

When “Mr. Jump” is opened, it will ask players to sign into their Game Center account, which allows for multiplayer gaming and competition. If players already have an account, the game will automatically sign them in. Having an account with Game Center isn’t necessary to play the game.

“Mr. Jump” is a game in which players control a box-man named Mr. Jump. Mr. Jump hurdles through various terrains when the player taps the screen.

The game has 12 different stages, which will take players a long time to unlock. After each stage, the player passes levels and the game gets harder than before.

The game’s settings have various obstacles that make the game more difficult.

Players can die in many absurd ways in “Mr. Jump,” such as landing on sides of platforms and on spikes. “Mr. Jump” keeps track of all the deaths you’ve achieved, which can be a real bummer to look at. If players are tired of all the numerous deaths, they have an option of buying the next stage each at $0.99.

Visually the app’s design is very colorful and incorporates many geometric figures. Each world has its own theme of colors. For example, world one has blue, green and brown colors which make up the land, sea and mountains. World two, on the other hand, has mostly shades of green which represents a setting such as a forest or a jungle.

As of right now, the app is only available on the app store for devices with iOS and will soon be released for Android products. “Mr. Jump” is rated four and a half stars according to the iOS App Store.